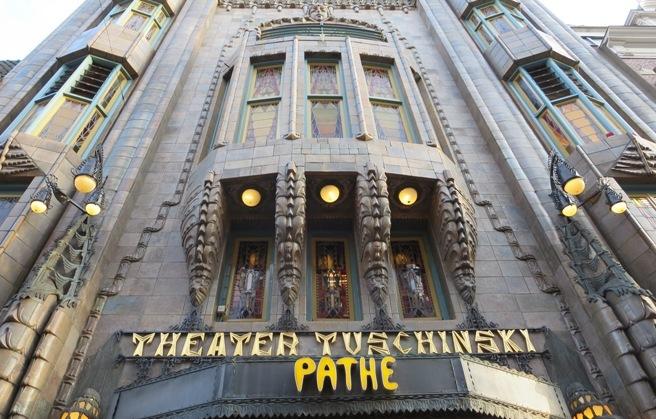 From modern multiplexes showing all of the latest Hollywood blockbusters to traditional picture houses featuring authentic Dutch films, Amsterdam is bursting with a huge selection of cinemas, all of which are within easy reach of many of our Amsterdam holiday apartments.  Several of the cinemas not only offer a memorable night at the movies but are also iconic landmarks within the city and are definitely worthy of a visit.

Amsterdam’s superb array of fantastic cinemas, many of which screen films in their original language, ensure that visitors have the opportunity to enjoy much-loved films within various settings throughout the city.  With so many fabulous cinemas to choose from, this top 5 list has been compiled to provide film lovers with a mixture of venues and film genres to suit their individual tastes, each one offering a memorable experience whilst visiting this truly fascinating city.

Situated in the north of the city, the Eye Film Institute is set within a futuristic, contemporary building which opened to the public in 2012.  Within the magnificent building are four fantastic cinema screens which offer daily showings of all the latest must-see films, together with the brilliant addition of classical films.  The Eye also boasts a fascinating museum which is dedicated to film and cinema and is often where many of the city’s popular film festivals are held.

Regarded as an institution within the city of Amsterdam, The Movies is one of the oldest of its kind in the city and dates back to the early 1900s.  Nestled amongst the authentic buildings of the bustling Haarlemmerdijk, a busy street not far from the city centre, this delightful cinema boasts an impressive art-deco interior and is renowned for its alternative film and art house cinema screenings.  The Movies also features a charming bar and restaurant, making it the perfect setting for an evening of entertainment.

Run by a fantastic team of volunteers, this superb cinema offers a taste of traditional Dutch cinema and is well-known for its international art house and documentary films.  The Ketelhuis, which translates to the Boiler House, is located at the edge of Amsterdam’s beautiful Westerpark – an area which was previously the site of a gas factory.  The three screening rooms are also available for hire, allowing visitors the chance to get together for a celebration within an alternative and unique environment.

Not only is the Tuschinski a stunning cinema positioned close to the heart of the city and one which offers daily screenings of a huge range of films, it is also one of Amsterdam’s most cherished buildings and attracts visitors from all over the world.  Set within a former palace, which was transformed into a cinema in 1921, this striking building is adorned with remarkable architecture.  The main auditorium, which is often used to host the premiers of many Dutch films, also features a stage, an organ and several viewing boxes, which create a theatrical ambiance for visitors.

Situated upon the outskirts of the city, close to the footballing home of the legendary Ajax and just a twenty minute train ride away from Amsterdam’s Centraal Station, the Pathe Arena is an immense, modern multiplex of 14 cinema screens including an incredible I-Max screen. Showcasing all of the latest Hollywood films, together with a selection of Bollywood productions and a collection of art house offerings too, the Pathe Arena is a cinema which is certainly worthy of a visit.

More information on: Theatres and Entertainment in Amsterdam