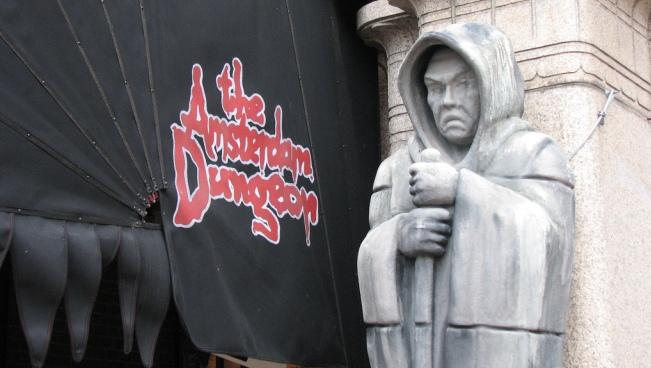 effects and a roller coaster ride make this attraction an interactive, exciting

and, at times, quite frightening experience which should not be missed.

about a city’s history is always something that I enjoy, but it is always

refreshing to hear about the more sinister side too, something which the

by Merlin Entertainment, the same company who own Madame Tussauds, the

I felt a real sense of excitement and anticipation. A few minutes later I had arrived at the

dungeon and that is where my journey began.

group was met by the ‘Gatekeeper’, a very scary looking person who led us to

the start of our tour – the ‘Descent’.

We all huddled into an old fashioned, cage type elevator which took us

deep underground and into the dungeons.

diseases. At this point, as the light

stronger, I remember wondering if I had made mistake and should have stuck to

the ‘traditional’ history of the city.

My thoughts were thankfully short lived as the elevator reached an

abrupt halt and we emerged into the ‘Torture Chamber’.

of rotting flesh and the cries for help sent shivers down my spine. It was here that we met the ‘Torturer’, who

his work. The next stop was the VOC bar,

recruiting sailors onto the fateful VOC Batavia. Our group were his next victims, as we found

ourselves on board the overcrowded and revolting 17th century

vessel. Here we learned about the awful

illnesses and dreadful conditions that the crew had to endure.

the ship, we continued along into an operating theatre where we relived the

autopsy of the renowned criminal known as Black John. I must admit that the vile smell at this

point was quite pungent, but added to the authenticity of the story we were

being told. From here we were taken to

into the history of the judicial system.

We were then led into the house of a condemned witch – Meynes Cornelis,

the scariest part of the journey for me, as it is here that you encounter an

eerie appearance of a ghostly figure. I

did actually let out a little scream at that point, much to my group’s

to say, I was quite relieved to find my way out of the witch’s house and into

the ‘Labyrinth’, a maze of dark streets which told the story of illness and

suffering. After finding our way through

the confusing passageways, we came to the final part of the tour – the ‘Grim

Reaper’, a thrilling roller coaster ride which is the

only way to escape the dungeon. I’m

enjoyed the experience (even if I was petrified at times). More information, including online ticket

sales, can be found on the Amsterdam Dungeon website – www.thedungeons.com/amsterdam/en.