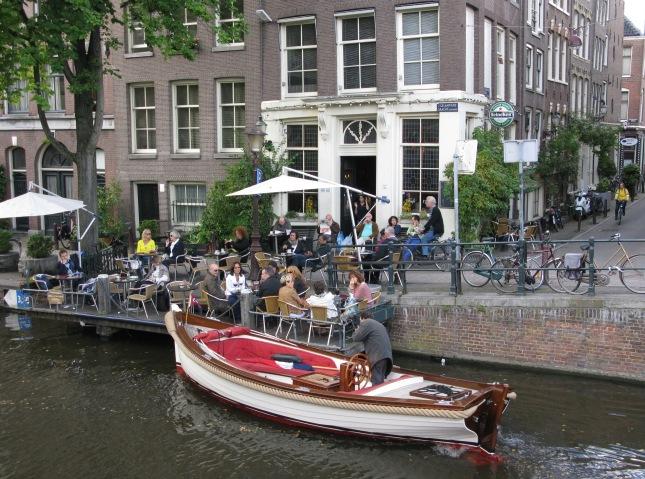 lights and the smoke-filled cafes. Its relaxed atmosphere, the cultural history

art, canals, parks, red lights and coffeeshops; there are many reasons why

Amsterdam sees so much tourism per year. One of the main reasons that people

visit Amsterdam for a short stay is the cultural history. Amsterdam’s

It may be a

compact city but there is a lot to do in and around Amsterdam. The last visitor

the range of visitors coming to Amsterdam is becoming increasingly diverse

at 29% out of the over 10,000 interviewed and all other age groups forming

around half of that percentage. It also showed that Amsterdam is attracting a

the return visitors. The top four countries in terms of visitor numbers remain

Great Britain, the US, Germany and the Netherlands while Brazil, Russia, India

So, what is so

around the city is a favourite past time amongst people of all ages. The 17th

picturesque canals that you can also explore on a boat tour. With around fifty

cultural history plays a major role in attracting short stay visitors. The many

cafes, restaurants and bars, along with the relaxed Dutch culture, make it an

ideal place to have a no hassle, free-spirited short break. While there are

particularly, for visitors with children and for those who just want to relax

during their short stay in Amsterdam.

choose from and many offering world-famous collections. From the large and

something to suit everyone’s tastes. The NEMO museum that sits over the IJ

tunnel near central station is particularly popular with children while the

likes of the Van Gogh get you interested even if you’re not a huge art fanatic.

And Amsterdam just wouldn’t be Amsterdam without the likes of the Hash Museum,

one of the things you should do is have a good rummage through the markets. This

is also a great time to mix with the locals, pick up a few bargains and

identify some great treats. The most raved about is the Albert Cuyp Market

which is in the Pijp area just south of the historic canal belt. The central

Jordaan district has a couple of popular markets too; Noordermarkt and

Lindenmarkt. If you are staying in our short stay apartments in the East then

try the Dappermarkt which is a general market where you can pick up vegetables,

meat and other bits and bobs that will be useful to have in the apartment. Flea

to one of the best at Waterlooplein. There are also a number of great shopping

areas including Kalverstraat by Dam Square, P.C. Hooftstraat near Vondelpark

and Utrechtsestraat which runs south from Rembrandt Square.

tend to go for the sin city appeal. The Red Light District and the many

about. Cannabis and prostitution are both legal in the Netherlands, although

both have strict guidelines. The Red Light District isn’t as seedy as everyone

purpose of smoking cannabis. Other appealing activities amongst the younger

groups include partying in the bars and clubs, the most popular being Melkweg

Mix with the locals

for relaxation and it’s something that the locals enjoy too. It’s hard to

bound to be one near your chosen short stay apartment. Escape into a park

during the day for a quiet stroll, a jog in the morning or some fun time on the

playground with the kids. In the summer prepare a picnic at the apartment and

head out into a park for unwinding or even sunbathing. The most popular park is

Vondelpark which is just a short walk away from Leidseplein. We also have a

number of apartments in that area too.

to make like the locals is to get on a bike. Almost 60% of Amsterdam’s

population cycles every day and there are just under 900,000 bikes in the city.

There are a number of bike rental companies including MacBike, Bike City and

business trip for a number of reasons: speed of getting around Amsterdam;

convenience, go where ever whenever you want; cheaper than public transport;

and parking is free! Biking in Amsterdam is also safe as there are designated

lanes on the main roads. Most of the rental companies also offer bike tours so

you can get to see all the sites on a bike which makes a fun activity for all.

favourites, some of which you can take back to your short stay apartment to

enjoy later. The Dutch love their fried foods and amongst the favourites are

crispy coating). While you’re out exploring Amsterdam or visiting the markets

you can also pick up raw herring, freshly made stroopwafels (caramel filled

biscuit) and loempia (Chinese spring roll). When thinking about stocking your

This is a must do

for all. You can explore the USECO listed canal belt on a boat tour with a

canals. There are boat tour companies running tours from outside of the central

station and just a little further down the road on Damrak, right next to the

main entrance into the Red Light District. Another great way to see their

beauty is to walk along them, stopping to take pictures on the humpback bridges

or for a breather in one of the canal side cafes with outside seating. The

Brouwersgracht canal, which runs through the northern part of the

centrally-located Jordaan area, is arguably the prettiest of all the canals

the Brouwersgracht past the Jordaan, cutting east through the southern canal

belt all the way to Amstel River. You will find some great sites along the

route such as the Anne Frank House, Western Church, Leidseplein and

Utrechtsestraat. Where ever your Amsterdam apartment is there is sure to be a

These include the Begijnhof,

convent and housed the Beguines. There you will find the English Reformed Church

and an old wooden house that dates back to 1528. The Red Light District is home

century when practising Catholicism was forbidden.

business short stay; a very random location for such a well-visited and

beautiful old church. Stick around in the area and you can take pictures by the

Belle statue which is of a female sex

the bronze sculpture in the cobblestones of a hand caressing a breast.

quarter is a wonderful place to visit and is filled with history. Opposite the

Jewish History Museum, which makes a great outing on its own, is the Portuguese