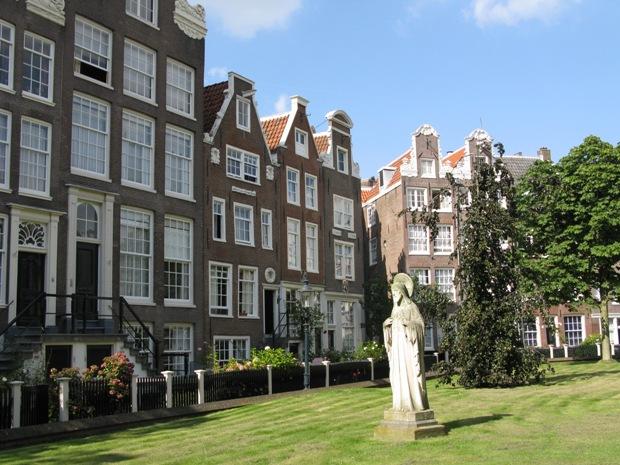 The Begijnhof is one of those really rare sights to see, especially given the ever-developing modern metropolitan setting of Amsterdam. It is one of the oldest inner courts in the city – and the only remaining one, for that matter.

Once you’re there you’ll come across a range of breathtaking 14th-century typical Dutch buildings; they are private houses in vast majority – still occupied today, so you have to remember to respect the privacy of the residents although the entry itself is free. Apart from that, the place is also a home to the English Reformed Church, so you can expect to see daily masses, weddings and baptism ceremonies taking place. The area located in the south-western section of the city center, between the lower part of the Singel canal to the west and the area of Rokin to the east, the Begijnhof appears as something out-of-the-ordinary, bringing strong memories of the past with its unique architecture, charming atmosphere and a hint of mystery in the air. This picturesque court used to be once surrounded by water in its entirety, with the only entrance available at the Begijnsteeg (‘Beguines’ Alley’) accessible via a bridge across the Begijnensloot (‘Beguines Ditch’). The southern entrance from the Spui is a 19th-century reconstruction of the 17th-century addition and does not only facilitate the access to the place, but also opens onto a lovely book and art market which is also surrounded by lines of fantastic cafés, restaurants and boutiques, and to the north you’ll also find the Amsterdam Museum – rich with art and history, so you’re bound to take some advantage of many diverse attractions apart from the obvious aesthetic charm of the Begijnhof. Another interesting fact about this amazing spot is that as a medieval construction, it is a meter below the rest of the old city center, enhancing the special mood this place exudes.

The history Founded in the 14th century, the Begijnhof has always had a special meaning to the Venice of the North. The name of the court comes from the Beguines and Beghards – lay Christian religious orders who devoted their lives to help those in need, active mostly in Germany and neighboring countries (including the Netherlands, obviously) in the period of 13th to 16th century; the members of the congregation did not accept formal religious vows and lived in semi-monastic communities – just like the Begijnhof, the ‘court of Beguines’, although they declined from their ways by the 16th century. Another notable fact is that the order of Beguines consisted of single women only – mostly single by choice, but also widows, and although there are no Beguines left any more (the last of them passed away in 1971), the rules allow only such women to live here and some still do, in fact, so if you enter this magical place, try not to exaggerate with photo-taking so as not to disturb the rhythm of life of those local inhabitants.

The place What makes this place so special is that it has managed to remain a peaceful oasis in therapidly-expanding city like Amsterdam throughout all these years. A true Shangri La for all those seeking for a moment of tranquility inside the busy metropolis, it boasts a calm, slightly mysterious atmosphere and a beautiful original setting, and all this behind a mere, ordinary door serving as the entrance; think a bit ‘The Secret Garden’ by Frances Hodgson Burnett and you’ll get the idea. Behind the ‘gates’ you’ll find a belt of 47 traditional Dutch town houses; their original facades had to be changed and renovated in most cases, but the original structure has been kept without unnecessary interference. The buildings are really tall and reflect the architectonic trends of the time – the fondness of large windows and soaring rooftops seems to describe it best. Each of the houses possesses some distinctive features, yet 18 of them still enjoy a very characteristic original Gothic wooden framework. While all of the finely-preserved buildings found within the enchanted walls of the Begijnhof are of big historical importance and tell a lot of the Dutch society of the time, some of them have moved a bit to the foreground with their qualities, like the black-walled Het Houten Huis (translated simply as the ‘Wooden House’) or the remarkable structure of the English Church (Engelse Kerk). The former is actually the oldest house in Amsterdam, with the records mentioning the year 1420 as the time of its construction, while the latter, found in the southern part of this ‘natural museum’, functions as a landmark with its soaring spire and dates back also to the early 15th century, belonging originally to the Beguines but handed over to the Protestants in 1578. Four pulpit panels found inside the church were designed by Piet Mondrian – a famous Dutch painter, especially significant for Neo-Plasticism and an important contributor to the De Stijl art movement. The church itself as an institution is still active and delivers all the usual masses and ceremonies on a regular basis. Another merit ascribed to the Begijnhof is that in the 17th century it became a home to one of the few ‘resorts’ for the Catholics. In 1671 it had one of its private houses transformed by Philip Vingboons (a renowned architect of the time) into a ‘schuilkerk’ – a secret Catholic church (also known as the Begijnhof Chapel), named after Saints John and Ursula – the patron saints of the court of Begijnhof.

Apart from lots of other stories each building has to ‘say’, the court is also a great place to plunge into reflection in the surrounding of impeccable greenery of the lawn and trees rustling quietly in the wind. You’ll also be able to see an intriguing original water pump and a statue of a Beguine. This Dutch ‘Silent Hill’ is also credited with one another significant and a bit ‘eerie’ quality – the strong affiliation to miracles said to have occurred in the past, with one notable example of the Eucharistic Miracle of Amsterdam from 1345, veiled with a mist of mystery. If you’re looking for some peace and quiet, a moment for introspection, reflection or an occasion to ponder on the less-earthly matters, the Begijnhof is the perfect place to go to. Enveloped by a curtain of secret and unusual tranquility, this wonderful court gives you a deeper insight into a very specific bit of the city’s history, but also provides you with great opportunity to discover the precious qualities of Amsterdam’s architecture of the past. The Begijnhof is open every day between 9 a.m. to 5 p.m., but once you decide to visit the place, do bear in mind that it is still inhabited, so try to make your visit in-line with the overall mood of the spot – quiet and focused on enriching your inner experience.

Civic Guards Gallery, another great addition to this solemn place is the direct access to the Schuttersgalerij, or the Civic Guards Gallery, constituting a section of Amsterdam Historical Museum’s exhibition. It is a remarkable gallery of old portrait paintings depicting many distinguished citizens of Amsterdam. If you’re strolling through the courtyard of the Begijnhof, follow it until you see a huge glass, take left and head right to the Gedempte Begijnesloot dead-end alley. The entrance to this charming gallery is there – free of charge.