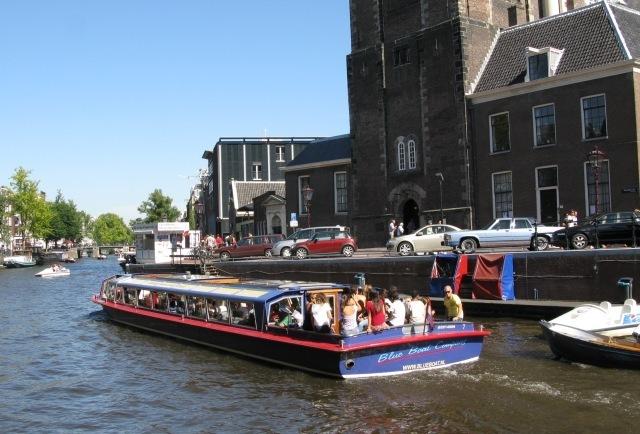 canals is a given on any short stay in the city; there’s no question about it,

you just do it. Amsterdam was built around these historic canals and to

appreciate all the wonderful sights you have to go on the waters. There are

bound to be one near your apartment. Choose from daily cruises, night time

A visit to Amsterdam is never complete without

sailing its historic waterways. In seeing the canals on my first visit to

Amsterdam I just couldn’t resist the popular experience. The canals were

originally created in the early 17th century to increase trade and

expand the city, which they did perfectly, and over time have become a popular

way of experiencing the sights that were built around them. As the most popular

the ground for the construction of the famous Canal Belt; a great year to sail

the canals and be a part of history.

So join in with the millions every year and

discover Amsterdam from a different perspective. There are many canal tour

operators and a number of departure points throughout the city. My partner and

atmosphere was relaxing. We noticed different languages being spoken but also

Dutch as Amsterdam gets a lot of tourists from all over the Netherlands. The

tour was given in Dutch but the guide did also offer English. I let my partner

Most boats are fully covered so that you can

enjoy the experience at any time of the year. As you glide through the canals

the 17th century houses and the historical canals. We took pictures

As we glided through the network of canals

during the hour-or-so tour night time kicked in and the sites were even better.

water and created a very calming atmosphere. As we passed some wonderfully

in one; maybe it was the Piscean in me or the whole romantic angle, gliding on

glittering waters with your partner on your side, but the calming aspects of

living on the water were incredibly appealing at that moment. Luckily though if

We were enjoying the lovely views so much that

a very romantic experience. There are so many canals to see though so if you do

with a different operator so that you can cover more ground; perhaps you could

Leidseplein. The Canal company offers a 100 Highlights Cruise which passes all

of Amsterdam’s famous attractions in one hour such as the Anne Frank House,

Westerkerk and canal houses from the Golden Age.

A cruise with a

Do you fancy a dinner with the staff, a DJ

spinning the tracks at a private party with your friends, a romantic meal out

with your partner or even pancakes for the whole family? You can have all of

than just the expected cruise. On a hot summers day you could even enjoy a BBQ

while you sail the historic canals. Or use that warm weather as an opportunity

sights and having fun together.

If you plan on an activity-filled short stay and

such as the Anne Frank House, Leidseplein and Amsterdam Hermitage. The Canal

Bus has four different routes and tickets are valid for 24 or 48 hours. You

Madam Tussauds or the Rijksmuseum.

for I Amsterdam Card holders.