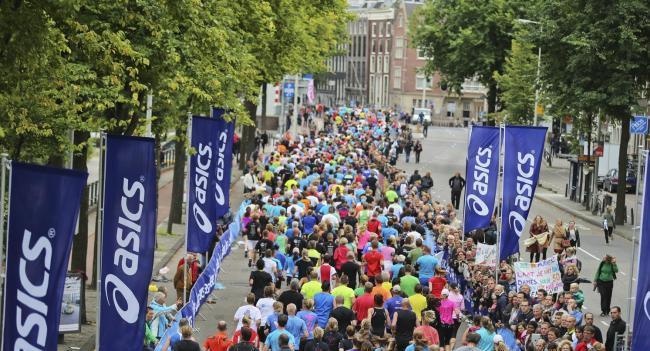 Start counting down to September 21st – 22nd and be one of over 55,000 participants testing themselves in one of the world’s largest running events, the Dam tot Damloop – passing along the Prins Hendrikkade in Amsterdam’s center, through the IJ automobile tunnel, all the way onto the Zaandam. Each race in this series provides a strong connection with the city! Feel an extra surge in will pulsating outward from the 250,000 cheering spectators and the dozens of live music performances set up along the way. All are welcome to join; there is also a Mini Dam to Dam Run for the kids and more!

Plenty of variations add diversity beyond the main run. If a full 10 (English) mile race seems too daunting a challenge, then there is a 4 (English) mile race as well. Similarly, for any children (ages 4 – 12) wish to take part, there are two alternative race lengths for them: 0.6 km and 2.2 km. There is even a Business Run for companies to have their members spend time together training for a run competition, either the 10 mile or the 4 mile version.

During the weekend, other forms of endurance races further broaden the event’s spectrum. Prefer cycling to running? Well then, there is a bike route starting and concluding in the city center and passing through the idyllic Noord-Holland countryside; distances include 40 km to 145 km. For those who prefer hiking, there is a walking course that spans from 9 km to 40 km.

Women and girls have their own race as well with a special 4 (English) mile run called the Run 2 Day Ladies Damloop. Registration costs € 10.00 with an entrance deadline of September 1st. The fee is donated to Dance 4 Life projects in Peru, an organization that educates young people about sexual health and protection. Voluntary charity is also available on site. Different registration rates apply though for each race, including fees for running shirts and medal inlays; check here for details: www.damloop.nl/en/rates/.

Should either of these exercises seem too rigorous, there is always the option of finding a street to cheer on the racers. Free buses help everyone to arrive where they wish since spectators contribute a vital role to the event’s lively appeal. In fact, hundreds of thousands of supporters attend each year, adding their own stylized banners, music, refreshments and encouraging atmosphere. There are even prizes awarded for the most vibrant banner and street.

Whether one actually races or decides to go support the racers, the Dam tot Damloop brings out the best in city-wide health promotion. After run festivities happen at the Burgemeester in ‘t Veldpark. Also, each route connecting neighborhood throws a party celebrating the common exertion for a stronger well being. Running, hiking, and biking are the core of this weekend event; embracing the best in friendly competition while exercising the Dutch capital’s sportive, cultural spirit. You might want to consider one of our Apartments in Amsterdam for your accommodations.

So pack those running shoes and take a communal jog along the canals of the city center, perhaps all the way to the outskirts and back with friends. Here is an open invitation to meet others of all age groups who value fitness and Dutch culture. Seeing Amsterdam through the lens of friendly striving and cheerful fervor re-focuses the event’s value beyond the foreground of an individual run and onto the background of noticing, in stride, the city’s full body from center to extremity, from Amsterdam to Zaandam and back.