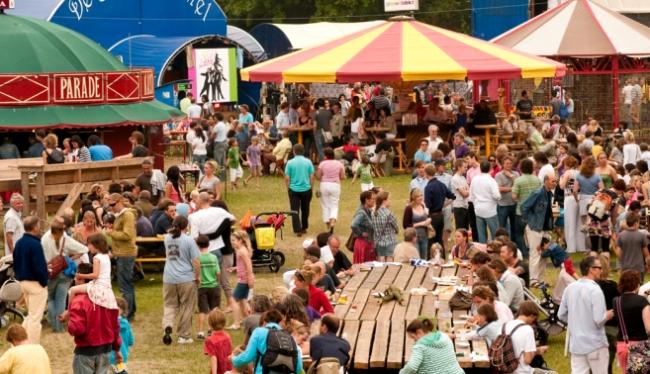 A travelling tent festival of theater and more, De Parade, happens among four major Dutch cities, transforming public spaces into lively summer, circus stages.  These theater, dance, and music performances provide some rare artistic displays, such as antique whirligigs made of miniature wheels. Inventing light, exciting scenes for a charitable cause is the ultimate purpose of De Parade. There is even a day program given for kids. Lasting from August 9th – 25th in Amsterdam’s Martin Luther King Park, food stands line the park to offer culinary delights that complement the frolicking festivities. With 74 performances, 19 children shows and 35 bands, this event truly has something for all to value. So bring the kids along for a full family outing!

Prior to arriving in Amsterdam, De Parade entertains in Rotterdam, the Hague and Utrecht. Since this is an affair limited to the Netherlands, most theatrical pieces are given in Dutch. However, for those lacking the Dutch language, there are plenty of other reasons to attend beyond theater; for instance, live music and Dutch to international food as well as an essentially energetic, whimsical environment of fantastic pleasantries.

Actor-artists in their fanciful attire perform out in the open and at hidden locations. They surprise festival goers with a variety of short and of long plays. These disguised characters offer something to tickle all types of minds, young and old.

Kids will especially enjoy their time at De Parade. On afternoons, there is a Kinder Parade program which includes handy-crafts and art projects, children’s theater and even cooking. All the children’s artwork is saved and presented at Atelier Villa Lila. There are also vintage fair swing rides open to all ages.

Once an appetite arises from engaging with all the intriguing displays, one readily finds a wide selection of delicious food stands and lovely restaurants.  Choose from international foods like Mexican or Japanese to Dutch desserts, to wine and cocktails. De Parade carries its consumption practices with a strong conscience. The house wine comes from organic grapes grown in Spain, sold in recyclable PET bottles composed of ECO friendly packaging. Some of the tents have their own kitchen serving sustainable red meat, fish, and poultry to the highest European standards, whole farming free. There is also a grand, nostalgic candy shop open to satisfy any sweet tooth.

Amsterdam is well known for its high quality tap water. De Parade donates to the Join The Pipe organization, contributing to necessary water projects in Ghana. Information about the need for clean, affordable tap water in parts of Africa is available on the terrain area. This charity buys Ghanaian schools, for instance, water efficient toilets and faucets.

Theater tickets are bought online, music shows are free. The festival is either accessible by foot or by bike or by public transportation – simply take Tram #4 or #25 from Amstel Station. Avoid attempting to arrive in a car. Also, check out the De Parade website for a time table of programs and performance listings. Information is continually added and adjusted right up until the festival begins. The festival provides Dutch sign language interpreters to help with some performances specified on the website.

With this combination of eccentric performers, superb food and drink, diverse live music, a daytime children’s program and a decent charity cause, De Parade has all the ingredients to make a visit to Amsterdam extra attractive. The festival’s many sided features will appeal to most everyone who loves a good artistic spectacle. Part circus, Part outdoor theater, these two weeks of creative guises will set the city into the fervor of playful intrigue. Stay in one of our wonderful Amsterdam apartment rentals.