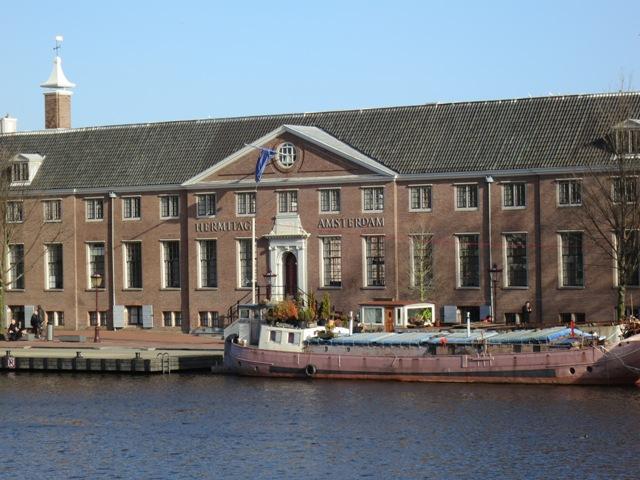 With lots of our Amsterdam apartments located

in the picturesque area of Plantage, you’ll be able to visit the magnificent

the former capital of Russia. At present, it is the largest satellite of the

original Hermitage Museum (there are other two, located in London and Las

Vegas) and welcomes its visitors with over 2,172 square meters of exhibition

two huge exhibition halls and smaller exhibition rooms. The rest of the space

is taken by lecture rooms, concert halls, staff accommodation, offices and a

restaurant (called Neva) and a lovely inside garden, which in total amounts to

interesting details on the history of the Amstelhof building, that is, the

location of Hermitage Amsterdam. There are also temporary exhibitions which

change every six months. Read on and you’ll learn more.

The Place – the story behind

as their cultural ‘colony’ anyway. To put it in a nutshell, the founder of

Saint Petersburg (and this is also a Dutch name, by the way), tsar Peter the

Great, stayed in Amsterdam while travelling across Western Europe at the end of

the 17th century. He was so impressed by the Dutch architectonic

solutions that he asked them for help in erecting his city, as the area

of an obstacle for the Dutch! This gave a start for a successful commercial cooperation

between the two countries, dating back to the Golden Age and continuing to

date. Legend says that when the original Hermitage was opened in Saint

Netherlands, the visitors were offered a free shot of vodka as a form of

Hermitage first arrived to Amsterdam on 24 February 2004. It opened as

Hermitage Amsterdam in a small building of Amstelhof on Nieuwe Herengracht,

right next to the river of Amstel, sharing space with a retirement home

awaiting to be closed in 2007. Unfit to meet its original purpose, the

be completely remodeled, revamped and redeveloped to become suitable for a

place like Hermitage. The result of the extensive works (worth about

Medvedev; the former premises of the museum now functions as an education

centre named Hermitage for Children. Since that time, the place has enjoyed big

popularity and an impressive turnover – after all, the collection found inside

is really unique, for it boasts many fantastic works of art rarely known

outside Russia. And to make things clear – all of the splendid exhibits that

company’. Well, maybe not ‘directly’, as they are first carried by trucks to

Finland, then shipped to Germany and transported by land to Amsterdam, but you

get the general idea, right?

Inside the museum – permanent exhibitions

two permanent exhibitions that you can see all year in this fantastic place. Both

of them are found at the front of the building, in the Amstel Wing. One focuses

‘distant relationship’ between the State Hermitage in Saint Petersburg and

Hermitage Amsterdam, being so far and yet so close at the same time. The other,

in turn, focuses on the history Amstelhof and its original role played for the

city of Amsterdam, both as an institution and as a building; it actually

extends further into the so-called Regents’ Room for Women and the old kitchen,

both reshaped to look as close to their original form as possible, basing on

the recovered documents, plans and old photographs. One thing is for sure – the

sense of history is right there in the air, just as you cross the door of this

Russia and the Netherlands – friends through

Nicolaes Wisten, a local burgomaster. Their friendship was much based on the

the best in the industry. There is a book describing the friendship of the two,

next to their portraits. Another case of memorable connection between the two

countries is the story of Anna Pavlovna, the daughter of tsar Paul I and Prince

William of Orange, later King William II. In the section devoted to their

given on her marriage. Still, the friendship between Ernst Veen and Mikhail

Piotrovsky seems to be the most influential relationship for Hermitage

Amsterdam, as the former formed a group called ‘Friends of the Hermitage’ which

contributed greatly to restoration projects in the State Hermitage in Russia.

Nicholas I, the founder of the Hermitage as a museum, which was opened to the

that, the visitors can take an interactive virtual trip through the State

feel closer to the source than ever.

three rooms dedicated to the past of this remarkable building. Its 350-year

found in the kitchen), paintings, documents and some interesting original items

from the Parish’s collection. Expect to see some authentic historic furniture

and admire the almost-original layout of the place. Dive into the history and

Inside the museum – temporary exhibitions

temporary exhibitions featured in Hermitage Amsterdam are usually arranged for

six months each. Until recently the visitors were able to admire many of the

masterpieces by the local grandmaster – Vincent Van Gogh. 75 of his works of

art were on display until 25 April 2013, but now the main theme has changed, as

apparently, the year 2013 is a very important one in terms of the relationship

between Russia and the Netherlands. Indeed, this theme of the

devoted fully to Peter the Great, the tsar who took Russia to the modern age. A

true man of skill and talent, he went down in history as a great leader, a

modernizer and, simply, as one of the most significant leaders of Russia. The

exhibition entitled ‘Peter the Great, an Inspired Tsar’ (from 9 March to 13

paintings, gold and jewelry from the ancient world, many important documents,

plans and schemes, but also weapons, Peter’s personal suits and one of his

coaches, all of which emphasizing his great inspiration by the Western world.

in Saint Petersburg, but additional items from the Netherlands and elsewhere

will also be available.

How to get there and how much is the entry

Amsterdam is located in a picturesque neighborhood of Plantage, reached easily

on foot from the Waterlooplein; you only need to head about 200 meters to the

south and you’ll surely see the characteristic building in a flash. The address

Waterlooplein; in either of these two cases, continue walking as described

above. There’s also a car park at the Stopera Parking on Waterlooplein 1 (a

white Stopera building; it’s a garage, for that matter).

The ticket prices change with each exhibition,

but usually the prices are €15 for people over 17; younger visitors can enter

free of charge. There are, of course, some special discounts for particular