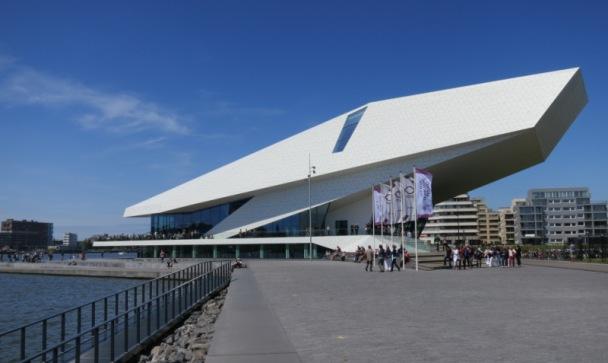 The only time you may go to the movies while on your short stay in Amsterdam Head to EYE Amsterdam for the Imagine Film Festival to sit in on a blockbuster or independent film.

Playing films from genres such as anime, sci-fi, fantasy or thriller this immensely popular festival takes place on 9 – 18 April, 2014 with the horror marathon being held at Pathe Tuschinski. Will this year’s 30th annual Imagine Film Festival be the blockbuster of your short stay in Amsterdam? Screening both feature films and short films from the 9th to the 18th of April, 2014, at the EYE Arena this small but popular film festival will no doubt see hordes of fans of all film genres; a massive audience that could easily count up to 20,000. Imagine Film Festival started as a horror film festival called the Weekend of Terror (WoT) showcasing only this one genre to horror hungry fans. The film festival as it is today is more like a sell out at the box office as it screens various genres of blockbuster and independent movies by filmmakers from all over the world. The selection of films is a varied as the popular tastes of the modern age so you could be watching a sci-fi film one day, an anime another, followed by a martial arts flick or a full on fantasy adventure.

So no matter the interests your leisure or business short stay in Amsterdam could be filled with enough cinematic viewings to last until the following year. The film listing includes: Coherence, Dead Snow 2: Red vs. Dead, Dune, Enemy, Wu Xia, We Are What We Are, and The Raid 2. The festival opens with Belle en het Beest and closes with Witching & Bitching. Imagine does still keep WoT’s original purpose alive by screening a ‘Night of Terror’ at Pathe Tuschinski, which is near our Amsterdam apartments in the Rembrandt Square area, with a midnight marathon of four horror movies. If you’re a fan then buy your tickets in advance via the official Imagine website from March 18, 2014. The EYE Arena plays a perfect host for such an event with its impressive modern interior and exterior. The eye-catching building which is scenically located on the north band of the river IJ is freely open to the public and when there you can even enjoy a panoramic view of the water and the city. Out Amsterdam apartment in the Red Light District, Dam and Jordaan areas are the closest to EYE. For an extra impressive start to your visit at the Imagine Film Festival you could make your way there on the free ferry towards Buiksloterweg which runs 24 hours per day from Amsterdam Central Station. While you ride the ferry you get to enjoy Amsterdam’s waterfront and great views of the surroundings. The ferry crossing is only a two minute journey and is suitable for pedestrians and cyclists but well worth it for the pictures you could show to folks back home. In addition to the screening of about fifty feature films and thirty short films, Imagine will also be hosting master classes, symposiums and Q & A’s with directors, writers and actors to give a more in-depth experience.

As every year the festival will be presenting its Career Achievement Award to a filmmaker with an outstanding track record in the field of fantastic cinema. In recent years this award has been personally accepted by filmmakers such as Neil Jordan, Rutger Hauer and Tim Burton; some of which have also held master classes and screenings of their latest movies. For the fifth year running this year the festival will also be screening the winner of the Time Capsule 2014 Award which anyone can take part in. The idea is to create a thirty-second festival trailer that captures the festival’s essence, with this year’s theme being Fantastic Science. A jury will select three trailers to be shown through the festival and the winning trailer, picked by the jury and audience, will be awarded at the closing night ceremony. Cost: tickets start at €7.50. Ticket sales begin on March 18, 2014 at midday. For further information such as a list of the films that will be screened, film schedule and the full price list you can visit the official website.