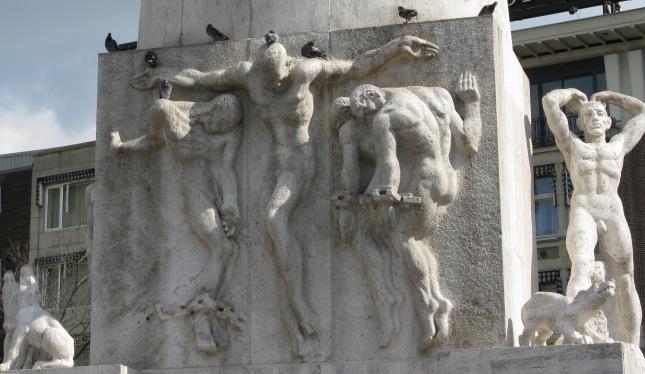 Netherlands. It marks the day that the country was finally freed from the grasp

of Nazism at the end of the Second World War. If you are visiting Amsterdam on

this day then you will find it hard not to be swept up in the party spirit.

Netherlands had hoped to remain outside of the conflict. Any such hopes were

quickly dashed however when the Nazis invaded the country in May 1940. The

took control of everything, food supplies in shops were rationed, life in

for the Germans. Meanwhile, most disturbingly, the majority of the 150,000

of the Nazi regime.

Some Jewish families managed to hide in

friends’ homes and businesses and were kept fed and supported for years. The

most famous is of course Anne Frank, her family and friends who lived in a

secret annexe at the top a warehouse building at 263 Prinsengracht. The Anne

Bergen-Belsen Nazi concentration camp. Those that harboured and assisted Jewish

France in June 1944 and worked their way across Europe. Netherlanders are

likely to have felt optimistic that help and liberation was not far away.

wreak further havoc upon most of the country’s already exhausted population.

bulbs. It is estimated that some 18,000 Dutch civilians starved to death during

It was not until the 5th May

1945 that the whole of the country was finally liberated by the Allied Forces.

celebrated by the Netherlands so ferociously. It is known locally as Bevrijdingsdag.

Throughout Amsterdam and the country at

on May 5th. These multiple

(Bevrijdingsfestival). If you are in Amsterdam on this day then you won’t fail

and DJ stages spread throughout the city. From the Westerpark to the NDSM-wharf

and the Homomonument, you will be greeted by an infectious and uplifting energy

and spirit. The latter location was the world’s first war memorial to the

Nazi Occupation of Europe. It is normally a place for reflection and quiet

contemplation but becomes a particularly upbeat place for celebration and

During the Occupation of the Netherlands there

are open for the public to visit, bringing their story to life.

A special concert is held

Carré. Dutch Royal family members are often amongst the audience.

Amsterdam is actively encouraging the citizens

with each other out on the streets of the city to mark Liberation Day. Over 200

public locations participate including Dam Square itself. Why not pop along

yourself and raise a glass to the freedom of the country.