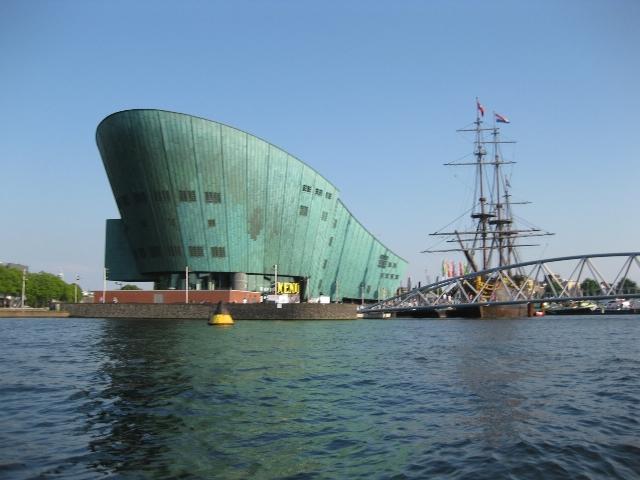 Set within an iconic green building and located upon Amsterdam’s Oosterdok, just minutes away from Central Station, the Nemo Science Centre offers a fun packed, educational experience for all ages.  Boasting five floors of science and technology, this interactive museum is definitely worthy of a visit.

often wondered what the huge green building, that was located on the Oosterdok,

the Nemo Science Centre – an interactive and educational museum dedicated to

spoke of taking part in experiments and creating giant soap bubbles, so I decided

structure, similar to that of a ship’s hull, which is the Nemo Science

Centre. The centre was originally

founded in the early 1920s but occupied premises at a different location; it

Queen Beatrix of the Netherlands.

stood in the entrance hallway, looking at centre’s area map, it was easy to see

why Nemo is the largest science centre in the Netherlands, boasting 5 floors of

fun and information. With permanent

exhibitions such as ‘Space Shower’ and ‘Everyone Electric’, a theatre,

workshops and games, I knew that this was going to be a thrilling

experience. I headed straight for the

‘Soap Bubbles’ exhibition and I wasn’t disappointed. Here, I was able to create the biggest bubble

of washing up liquid, water and glycerine.

exhibition that I was desperate to view was the ‘Codename: DNA’ which taught me

all about DNA and its history. It was

all truly fascinating, apart from the Age Machine which showed how I would look

about building bridges and skyscrapers.

all the action, I headed to Nemo’s roof top terrace to relax and enjoy a much

needed cup of coffee from the café. The roof

public free of charge. As I ended my

visit, I made sure that I stopped in at Nemo’s superb gift shop, which sells a

huge range of products such as books, games and experiment sets. I bought myself a bottle of the giant soap

bubbles, which I had enjoyed so much.

My experience of the Nemo Science Centre was a

very good one and it is somewhere that I would most certainly visit again, I

Netherlands. Nemo is open Tuesday to

Sunday and also on some Mondays during the summer holidays. More information, together with online ticket

sales can be found on the centre’s website at www.e-nemo.nl/en/.