Rembrandt House Museum – Go back in time with Rembrandt

Rembrandt House Museum – Go back in time with Rembrandt 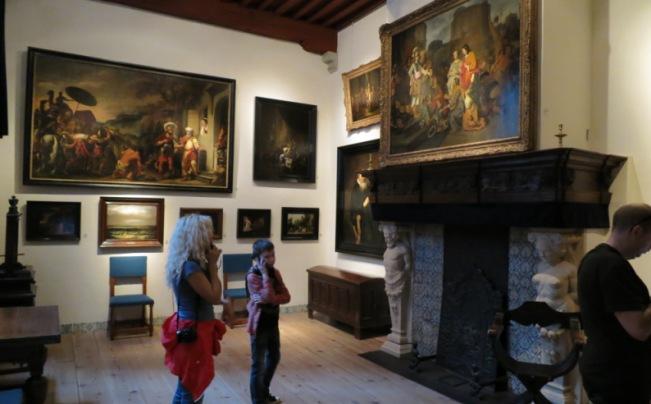 Step back into history

and experience how Rembrandt and 17th century Amsterdam lived. See

Rembrandt’s paintings, drawings and etchings and watch how he mixed his paints

and made his etchings. Located in the old city centre this is a reconstruction

of the famous Dutch painters house and not the place to see his masterpieces.

All in all it makes an interesting and educational outing for all ages.

Go back in time with Rembrandt

It’s not just a museum it’s a reconstruction of

this famous artists home, his private space and a step back into history; all

set in a 17th century house. Experience the conditions in which one

of Holland’s most notable people lived and worked in. It’s one thing walking

famous artists worked and lived in, it’s so much more eye opening.

When I decided to visit the Rembrandt House

famous work but that’s not what this museum is about. I was a tad disappointed

about that but the visit was well worth it in the end. We were able to go back

in time and live in 17th century Amsterdam and in Rembrandt’s house.

This museum makes an ideal outing for fans of

Rembrandt, those interested in the history of art or even just history in

general. One of the most interesting parts of the visit was the demonstrations

on how Rembrandt made his etchings and prepared his paint. Rembrandt enjoyed

floor along with a collection of his original etchings. Demonstrations are on

etching technique, the printing process and answer any questions about graphic

art. The print preparation demonstrations are in Rembrandt’s studio every day

and oil turn into coloured paints right before your eyes.

Located in the old city centre in the

Nieuwmarkt and Lastage district, the museum is a short walk away from many of

the other famed city attractions and areas such as China Town, the Red Light

On entrance you are given an audio guide which

is very informative throughout the tour of the house. The museum is very

educational teaching you how Rembrandt affected life in Amsterdam and vice

versa, and giving you an insight into art in that period. You also get to learn

about his history and his financial hardships. The paintings have descriptions

techniques. In the attic are a studio and various private collections of

oddities. There is a special discovery trail tour for children during which

they can learn to look at details in the room, think about aspects of 17th

century life in the Netherlands and learn to look at works of art. In addition

Alongside being an artist Rembrandt was also an

business. It was interesting to see his house and some of the objects he used

as subjects in his paintings and drawings. In total during his time he produced

drawings. He also used the people in his life as subjects; his wife, son and

The Rembrandt House in that time was in a new and

expensive neighbourhood which Rembrandt, although quite established by then,

could not afford entirely so his mortgage agreement included instalment

payments. Having not met all the payments forced him into great debt and

finally into bankruptcy. All the belongings were sold and the house was

Rozengracht canal. Eventually the City of Amsterdam bought the building in the

20th century and shortly after handed it to the Stitching

rooms. Now the museum is even bigger and includes the house next door.

One of the quirkiest things we got to learn was

why Dutch box beds were short: not because people were shorter but because they

bad consequences such as death through blood rushing to your head. There wasn’t

anything that we didn’t like; it was just really interesting to visit a museum

that’s so intimate and informative, not just about the painter but about life

in the 17th century in relation to art

. But remember, if you only want to see his masterpieces such as

The Night Watch, The Jewish Bride and

The Syndics then go to the Rijksmuseum! The

Portrait of Jan Six who was to become

mayor of Amsterdam in his later years.

The museum can be used for events such as

dinners, lectures or presentations. The museum areas are accessible for guests

which is in the new wing of the museum. Events can be booked for any day of the

week and can run between 5.30 PM to 11 PM. Catering is also supplied at extra

Just a couple of tips

entrance fee is cheaper by 2, 50 Euros for adults and 1 Euro for children.

the museums that you want to visit before you buy.

Entrance is free to those with a Museum Card or

the I Amsterdam City Card

About fifteen minutes on foot from

in the Rembrandt Square and Red Light District areas.