The Amsterdam Red Light District – Freedom at Its Best

The Amsterdam Red Light District – Freedom at Its Best 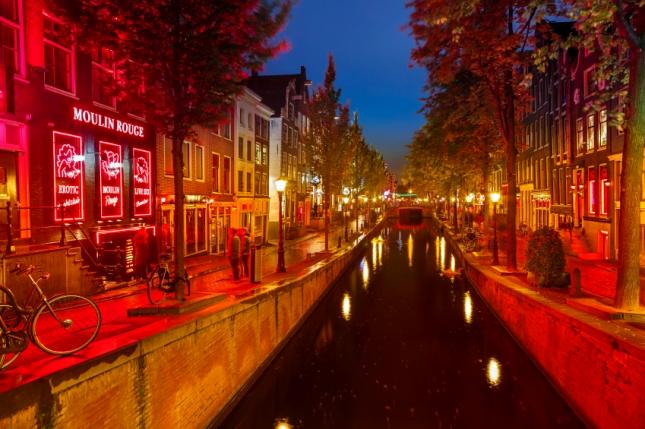 Displaying a free spirited atmosphere in a

voyeuristic and hedonistic experience which will enchant you instantly. The

district boasts of lovely canals, majestic buildings, and a culture of freedom

illustrated through its inviting dreamy coffee shops, and the lovely working

Before my first trip to Amsterdam, I had

heard numerous stories about its number one attraction worldwide: the famous or

rather infamous Red Light District or the “De Wallen” neighbourhood in

its own language. As you can imagine, most of the stories involved sex, drugs,

and a lot of rock roll partying in a sea of wilderness and joy. Being a young

man of temptations myself, I couldn’t resist giving it a little discovery, and

see with my own eyes whether this dreamy hedonistic environment really exists.

I embarked on a plane leaving London with four

English friends descending at the Schiphol airport, and immediately took the

first train north to Amsterdam. We had basically planned a crazy weekend with

explore the Amsterdam nightlife. Having heard so much about it, the Red Light

District was one of the main areas on our ‘must see’ list. We booked an

on a crowded street right in the middle of De Wallen, which is conveniently located

only ten minutes away from the Central train station. After checking in, we

To our own surprise, we immediately

room flat. Of course, these activities make the district world renowned but in

a nutshell, the Red Light encompasses anything you can think of: from cosy

inviting coffee shops where you can indulge in marijuana tasting, to arty cafes

coming from the four corners of the world to enjoy freedom. Indeed, the De

that exist in Amsterdam, and is a major tourist attraction. If you take a

stroll at night, you will realise that the later it gets, the more crowded the

neighbourhood becomes with persons interested in taking a voyeuristic stance by

checking the girls in the windows.

via the large harbour. The amazing architecture that can still be seen all

buildings. In the 17th century, the merchants moved out of the district, and

who were heading in the area in the quest for ladies, alcohol, and fun leisure

times. Up to today, the area has kept its allure of freedom and adult

entertainment, the prostitution finally being legalised in the year 2000.

Although one would expect such a free

spirited environment to be associated with dark underground activities, I was

astonished to notice the complete orderly way the district functions with

police holding a discrete yet constant presence, and the entire neighbourhood

functioning under precise rules. For instance, while checking out the beauties

in the window tiles, I could not help notice that even their presence was

carefully arranged based on either ethnic or thematic lines, the Eastern

Europeans working on a specific street, the afro-american women on another one,

the Dutch contingent on a different side of the canal, while the transvestites

on another part, among other categories. One area that I especially enjoyed was

in the proximity of Amsterdam’s oldest church, the Oude Kerk, a black imposing

with the wild pleasurable side of life. Right behind the Church, I discovered a

next to it, a small alley takes you the most tempting side of the Red Light

their cabins. By the way, as a tip of advice, if you want to learn more about

prostitution in the Red Light District, and how to approach the ladies, a

specially designed Prostitution Information Centre is available till late at

barely resisting temptation, I decided to stroll further, and check out the other

attractions in the De Wallen area. As mentioned previously, the Red Light encompasses

much more than its wild sex and voyeuristic side. The area is also one of the

In addition, you can stroll around the

streets in the search for one of the most striking old buildings in the area, the

Waag or the Amsterdam Weigh House. Nowadays home to a lovely restaurant on its

ground floor, this building dates all the way back to 1488 when it used be the

nearby Nieuwmark (New Market). If you are looking for a fresh market place for

vegetables and fruit, the Nieuwmarkt square is the place to be where you will

enjoy a bit of time off by chilling on a terrace, and admiring the diverse lively

crowds walking through the area.

Other attractions in the Amsterdam Red

heart of Europe, as well as the numerous and very different coffee shops where

you can step out of any stress you may have, and indulge in smoking the pipe of

peace with some of the local grown special weed or hash flavours. The Red Light

dancing bars and clubs opening their doors for a wild night to remember. One of

played by local talented artists bring the indie music straight to your ears,

especially after a few strong joints.

All in all, my experience in the Red Light

illustrating a free and open minded neighbourhood where everything is allowed

as long as it is done with common sense, and while respecting the Dutch law.

Inevitably, I have returned many times, and cherish it as one of my favourite

parts in the amazing city of Amsterdam.

What NOT to do in the Red Light District:

a. do not take photos of the women working

in the window shops as they prefer to remain anonymous, and you would be

immediately yelled at, and asked to delete the photo

b. avoid talking to anyone offering you

what you have been offered in the first place

c. watch out for pickpockets who can easily

operate in such a crowded and touristic district

d. do not over smoke yourselves – know your

How to get to the Red Light District

the Amsterdam Central Station, cross on Stationsplein, and turn left on the Zeedijk.

Continue up to Niewmarkt until you reach the imposing De Waag Building. At this

point you will find yourself right in the epicentre of the Red Light District.