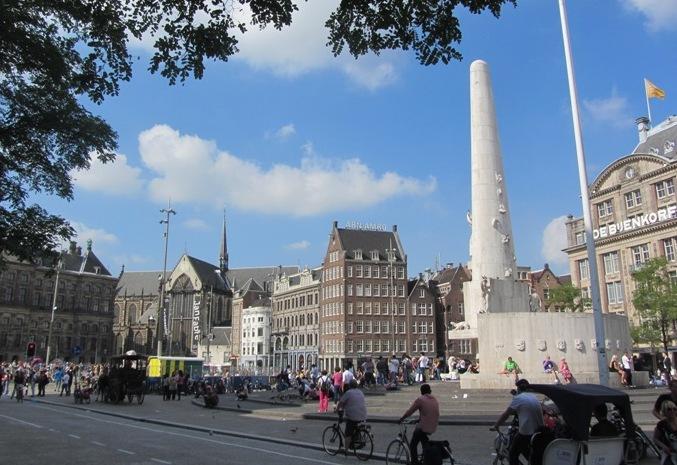 Perfectly positioned at various locations across the city, many of which are just minutes away from several of our Amsterdam holiday apartments, Amsterdam’s superb collection of iconic squares are all definitely worthy of a visit. Ranging from famous landmarks to nightlife hotspots, each individual square offers something for everyone who visits this truly remarkable city.

Amsterdam is a city renowned for its diverse range of activities and entertainment, a theme which continues through to its fabulous array of must see squares. This top 5 list has been put together to help visitors decide which of Amsterdam’s squares are attractions not to be missed.

Possibly the most famous square in the whole of Amsterdam, Dam Square welcome thousands of tourists from all over the world every single day and is often a bustling hive of activity. The square was built in the 13th century when a dam was created around the River Amstel to prevent the city from flooding. Since then, the square has become more and more popular and is where a collection of Amsterdam’s most impressive buildings can be found, including the magnificent 17th Century Royal Palace and the stunning New Church. Proudly standing at the centre of Dam Square is the striking National Monument which commemorates the casualties of World War II. Find an Amsterdam Dam Square apartment.

Dating back over several centuries, the Leidseplein was once used as a place for farmers to park up their carts prior to entering the city. Nowadays it is a vibrant square which is lined with shops, cafes, restaurants and music venues. It is here that you will find Amsterdam’s delightful street performers, who entertain passers-by with their huge range of acts, together with a selection of theatres, cinemas and a casino. During the evenings, the Leidseplein becomes a lively nightlife hub, with its fantastic dance clubs attracting revellers from far and wide. In the winter months, the square boasts an enormous ice skating rink, which is a sight certainly not to be missed. Find an Amsterdam Leidseplein Square apartment (Leidse Square).

Originally used as a butter and dairy market, Rembrandtplein is one of the busiest squares in the city and is yet another to exude a vibrant nightlife scene. Named after the much-loved Dutch artist, Rembrandt van Rijn, the square features a huge statue of the painter at its centre. Some of Amsterdam’s most iconic nightclubs can be found in and around Rembrandtplein, such as the renowned Club Rain, which offers a trendy setting in which to dance the night away. A fine selection of public transport links can also be located upon the square, connecting visitors to many more of the city’s sights and attractions. Find a Amsterdam Rembrandt Square apartment (Rembrandtplein)

Often referred to as a paradise for art lovers, Museumplein is adorned with several of Amsterdam’s most prominent museums and is yet another of the city’s top visited attractions. It is here that visitors will find the Rijksmuseum, which exhibits a simply stunning collection of Dutch artwork and includes many of Rembrandt’s masterpieces, the Stedelijk Museum, which is dedicated to modern art and the Van Gogh Museum, which showcases the world’s largest exhibition of Van Gogh’s work. The square is also the home to the impressive Concertgebouw – an incredible building which not only boasts an exquisitely decorated interior, but is also is the primary residence of the outstanding Royal Concertgebouw Orchestra. Find an Amsterdam Museum Square apartment (Museumplein)

Created in the late 1800s by filling in two of the city’s historic canals, Waterlooplein is a square which is the home to one of Amsterdam’s oldest markets and is certainly worthy of a visit. Originally, the market was the most important Jewish market in the city; however, following the Second World War, the market was reborn and is nowadays known for being the city’s main flea market. Amongst the hundreds of bustling stalls, which are open every day except Sundays and bank holidays, visitors can expect to find a wide selection of items for sale, such as second hand clothing, books and DVDs and old military uniforms.