Top 5 Ways To Get Around Amsterdam

Top 5 Ways To Get Around Amsterdam 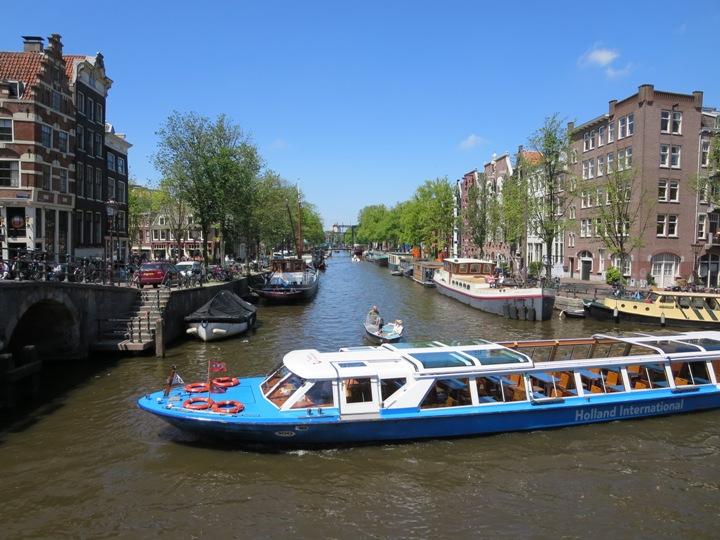 Getting around Amsterdam is easy, most things are within easy reach on foot but sometimes you may want to give your feet a rest and try a little local locomotion!

The GVB network is well integrated enabling you to buy one ticket and travel across any bus, train, tram, or metro though the metro is only really used for going to the suburbs. By far the easiest way to get around the city is on foot as many of the attractions are within walking distance of one another; travelling on foot allows you to absorb the ambience of the city and offers no restrictions.

There are over 800,000 inhabitants in Amsterdam and there are even more bikes to a ratio of about 1.5 per citizen! Cycling is the local’s preferred method of travel owing to the unsuitability of the roads for motor vehicles and the distinct lack of car parking spaces. There are many cycle lanes across the city marked in white lines, cycle hire shops (about €8 a day see below) and cycle storage facilities dotted around.  Never leave your bike unattended as cycle theft is common; preferably use two bike locks secured to a fixed object; wheel reflectors are mandatory as are lights at night and cycling more than single file is illegal. Watch out for pedestrians stepping in front of you and note that trams will only ever stop if it’s absolutely necessary! Walk your bike through pedestrianised areas or through crowds. Cycling is a way of life for many but a great way to explore for the tourist!

The canals are synonymous with Amsterdam and they provide an alternative method of transportation.  Pleasure cruises are a great way to see the city but also consider boats as a way to get around.  There are water taxis and canal buses alike though these are separate from the GVB ticketing system.  Why not hire a canal bike for a bit of fun – though watch out for the bigger boats – size means right of way on the canal system! A Canalbus day ticket will cost you about €16 and will last until 1200h the next day and stops at most of the main attractions along the canals.

Buses are a great way to get about in Amsterdam with many routes running out to the suburbs and to attractions further afield. Buses and trams run from about 0600h Monday to Friday, 0630h on Saturday and 0730h on Sundays, they to  tend to be used most when the metro and trams stop running. There are night bus services from midnight until about 0600h – 0630h on the weekend that all run back to Centraal Station. Night buses are noted on bus stops in a black square with a number (353 onwards) and cover a range of routes around the city and on towards the suburbs.  Tickets must be clocked in and out on buses and trams with an alert system that has recently been introduced to differentiate between embarking (one beep), disembarking (two beeps) and error (three beeps).

Trains run from 0600h (M-F), 0630h (Sat) and to about 1215h throughout the week, there are four lines which connect outlaying parts of the suburbs to the city centre.  There will be some planned disruptions and closures during the summer of 2013 whilst the system is upgraded and extended so check on the GVB website below for details. Current works are expected to be finished in 2015 and include Noord/Zuidlijn running North/South from beyond Centraal Station via Dam Platz and Rokin onto Zuid/WTC.

A new chip-card system has now been introduced to the GVB in Amsterdam called OV-chipkaart that is available in a dazzling array of options. The easiest options are purchased for their duration in hours i.e. 24, 48, 72, etc and can be used on buses, trams, metro and trains.  Be sure to clock in and out of each public transport you use otherwise the card will stop working.  Single disposable one hour cards are available as well at a current cost of €2.80. Cards can be purchased at stations or at the entrance to some supermarkets and at a premium on some buses and trams. Tickets for the nightbus are separate and cost from €3 with multiple journey tickets available from at all GVB ticketing offices and the Tourist Information outside Centraal Station.

Whether you want to wow onlookers at the half pipe in Museumplein or dash around the rollerblade friendly streets sharing the cycle routes the city is a friendly place for those on little wheels. There are several outlets for hiring such equipment including a couple in Vondelpark (see link below). If you’re feeling daring why not join the Friday Night Skate departing from the Film Museum in Vondelpark at 8pm for a 15km ride through the city – protective safetywear is recommended!

You can check out video on how to get around Amsterdam by Public Transport below: