Over 40 international architects light up Amsterdam 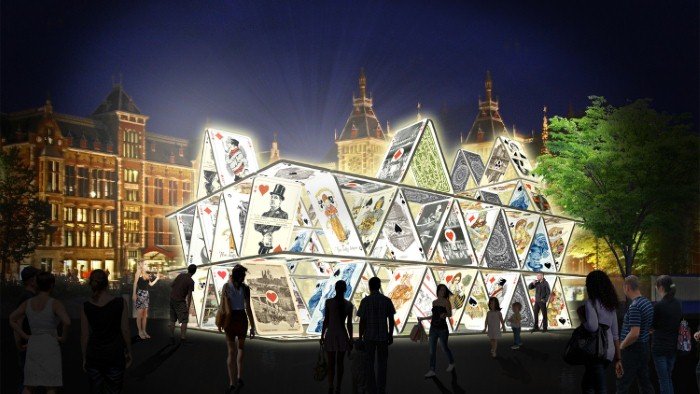 The Amsterdam Light Festival is only in its fifth year now, but already the Guardian newspaper proclaimed the annually recurring December event as ‘one of the most beautiful light festivals in Europe’. This year’s edition is Dec. 1 through Jan. 22, 2017. Some of the world’s renowned light artists are participating in the event, including Jacques Rival, Angus Muir and Alaa Minawi and most of the works on show are experiencing a global premiere.

For more than fifty days, the old city centre will be magically transformed into a fairytale setting as no less than forty artworks emerge during the dark winter nights. And that’s only the beginning. After this prelude, another 15 artworks will be inaugurated on December 11th and these will light up a special walking tour called Illuminade. That later batch of installations have been developed by young, mostly homespun, talent including Lisa van Noorden, Hagar Elazari, Julian van Buul en Vincent Vriens. And by the way, we at Amsterdam Apartments have many accommodations in this area.

Just picture the scene for a moment: Amsterdam on a typical winter’s evening already looks utterly romantic with its canal bridges lit up c and a succession of candlelights from the cruises circulating the waterways. During the festival, the city will be further enshrined in light, as the art installations turn the city itself into a living artwork. If that doesn’t get you into the festive mood, nothing will!

The theme is ‘A Bright City’ and one example of an installation is House of Cards, on Prinseneiland, just a stone’s throw away from the centraal station. This light work permanently tantalises the gods it seems, giving the impression it can blow away at any time. The fate of the card construction is literally up in the air, symbolising much of the architecture of Amsterdam houses, whose foundations tend to rest on underground poles (as most of the surface terrain is below sea level).

According to the Israeli artists behind the installation, the OGE Creative Group, the perpetual state of limbo of their six meter high oversized playing cards will make audiences hold their breath and then examine the construction to find out that it’s pretty solid after all. The many individual cards turn at given intervals. This versatility is augmented by the overall impression rendered; from the one side the construction looks like a modern church and from the other side it  resembles a classical architectural building made up of layered blocks.

Aside from the light installations, a sizeable fringe festival has emerged, consisting of a host of activities and events at museums, theatres, restaurants, shops and other, sometimes impromptu, locations throughout the city of Amsterdam.

In collaboration with the festival, the various canal cruising companies offer special trips called Water Colors, as of November 27th. The boats traverse the canal network of Amsterdam following a route that allows passengers to enjoy the light projections and installations from brilliant vantage points. Last boats depart at around 9.30 pm.

Last but not least, each and every installation in the Amsterdam Light Festival is accessible free of charge. Head to the Amsterdam Light Festival website (language is ‘denglish’ with words like ‘third’ featuring as ‘thirth’, really sweet and still comprehensible) to look up the programme and find out everything you need to know on a practical level.