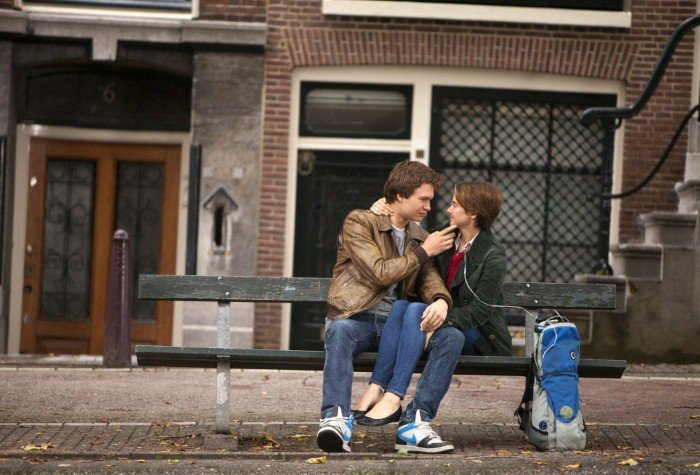 Stop press!! Stop press!!! There is now an update to the story about one of Amsterdam’s most elusive pieces of city furniture; the bench on the Leidsegracht which featured so prominently in last Summer's hit film 'The Fault in our Stars'.

This bench mysteriously disappeared soon after filming and suspicions were that a group of die-hard fans of the movie had taken it as a souvenir.. So as  not to disappoint the films' fans, the Amsterdam authorities created a replica bench, faithfully mimicking the orginal with all its blemishes.

They told us all a little white lie and made it appear this truly was the original. But, unbeknownst to the city's elders, only a few days ago, a different sort of truth emerged when the missing bench was officially installed on Hollywood premises! None other than Shailene Woodley and Ansel Elgort, the lead actors, inaugurated this hallowed seat which was provided with its own  plaque of authenticity .

Public opinion considers that this battered old item of Dutch street furniture on the 20th Century Fox site should really be  in Amsterdam, but it is more than likely that Hollywood has enough dough to hold on to this item of furniture for the time being, since the movie, in which two teenagers who both suffer from cancer, fall in love, cost around $12 million to make and has already generated around $300.

The city of Amsterdam also is much pleased with all the extra attention from you guys (the tourists) as a result of the film, which was released last summer and also features Willem Dafoe.

The two main actors spend a lot of time strutting around in Amsterdam, visiting cafes, restaurants and  the insanely romantic canals. If you haven’t seen the movie and are planning a visit to Amsterdam, it is really worth your while to watch it. I won’t give it all away, safe to say that various parts are played out in the Anne Frank House Museum which as you might know lines  the Prinsengracht (one of the three main canals).

People who love Amsterdam will also enjoy the various Vondelpark scenes in what might be considered to be the best natural setting for young teens who are in love! By the way, many of our Amsterdam Apartments are located in this very district, as is the emblematic Hotel Filosoof, where the two stay and which has since seen its fair share of 'Fault in our Stars' fans come in to take pictures.