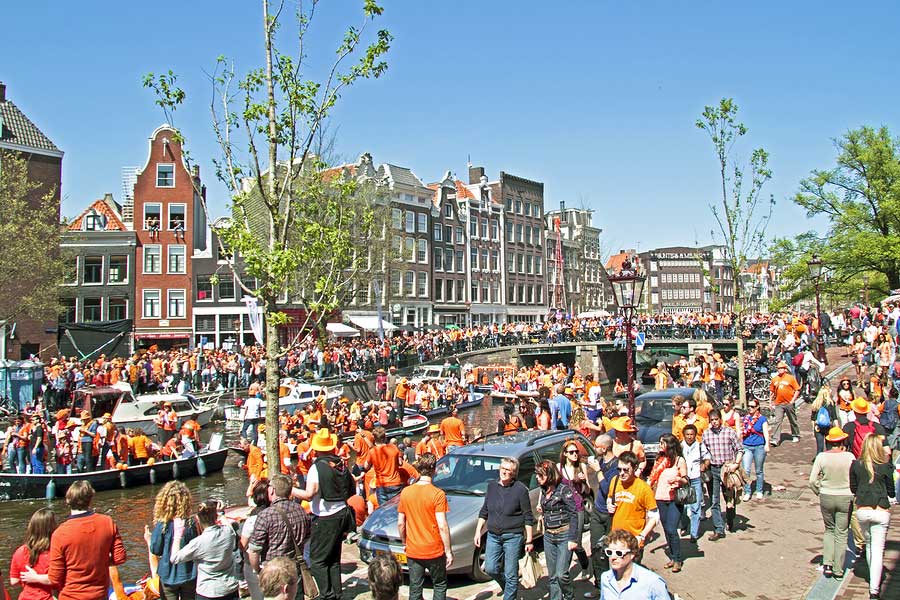 King’s Day, the party of the year in Amsterdam. Save the date: 27 April. Koningsdag is one of the biggest street parties in Amsterdam to celebrate the King’s birthday. Thousands of boats with partying people fill the canals. Expect a lively atmosphere and big crowds, Amsterdam’s population on King’s Day is twice that of any other day. In 2017 the best orange party in Amsterdam will be held on Thursday, 27 April 2017.

Live music, DJs, dance parties and a citywide flea market. During this day everyone in the Netherlands has the right to sell second-hand items, which makes it a perfect hunt for bargains. Furthermore there are many food stalls and all the cafes have counters outside where they sell beer and other drinks.

The street market in the Vondelpark is for children only. There are plenty of fun activities and the little ones sell their old toys and play on music instruments to earn some pocket money.

Orange is the colour of the Dutch royal family: the House of Orange-Nassau. On King’s Day most people make a special effort to wear orange clothes, wigs, hats and paint their faces orange. Or the colours of the Dutch flag: red, white and blue. Accessories like crowns and huge orange sun glasses are also popular.

The gay street parties are mostly held in the area around the Zeedijk (near Central Station), the Reguliersdwarsstraat, Amsterdam’s Homomonument (Westermarkt), at the Amstel River in front of bar Amstel 54 and around the corner in the Halvemaansteeg.

The fun traditionally begins on the evening before the big day: King’s Night. Every club organizes a special royal party and there are many dance festivals. Kingsland always comes with world famous DJs at the RAI Amsterdam: house, hip hop, electro, techno, urban and trance.

If you want to escape the madness during the day for a moment, take the free ferry behind Central Station and go to the NDSM Wharf in Amsterdam North. Enjoy the music and have some delicious organic food at café-restaurant Pllek while you have a seat outside at long tables with water view.

On King’s Day the entire city centre is closed to traffic and the buses and trams only run up to the outskirts of Amsterdam. The best way to get around is on foot.

King’s Day was previously known as Queen’s Day, every year on 30 April. After the inauguration of King Willem-Alexander in 2013, the date was brought forward by a few days to 27 April, his birthday. King’s Day is an official public holiday, everyone in the Netherlands gets the day off to celebrate.