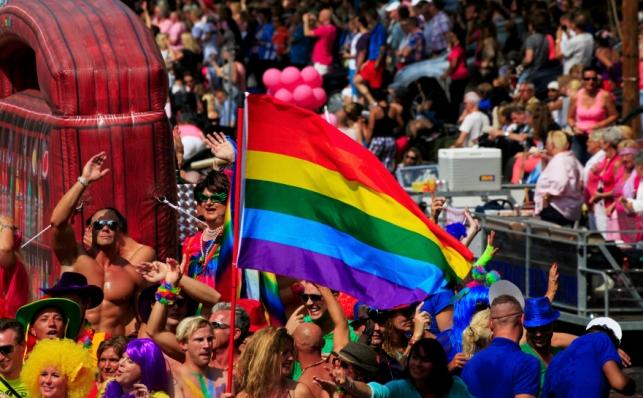 Gay Pride event which happens annually on the first weekend in August.

This high octane weekend is so established

to the city from all over the world. Expect an exceptionally loud and friendly

town during the days leading up to the big weekend.

It is no accident that Amsterdam Gay Pride

has grown into such a huge event. The city with its famous ‘live and let live’

men for decades. The Netherlands made a major statement with regard to

same-sex marriage back in 2001. Indeed homosexuality itself was decriminalised

as far back as 1811 in the Netherlands, some 156 years before even the United

Kingdom! Drinking establishments denoted as specifically gay have been in

existence in the Netherlands since 1927. Most importantly Amsterdam’s trail

blazing and respected COC, one of the world’s very first lesbian and gay rights

its work today. Even an apparently relaxed and enlightened city as Amsterdam

still has to deal daily with acts of homophobia.

7,300 athletes took part in 27 separate sports. Another world first was the

introduction of a unique war memorial, the Homomonument, specifically dedicated

to the lesbians and gay men who died in World War II. Since it’s inauguration

around the world facing oppression, denial, discrimination and violence. A

visit to the monument is something of a pilgrimage for many, a place for quiet

reflection and personal remembrance. It is likely you will see flowers,

If you are visiting Amsterdam during the

events being held throughout the city.

lectures and film screenings. From Thursday onwards many of the city’s central

If you are expecting a quiet leisurely

choose a different weekend or at least leave your canal tour until Sunday. The Saturday

full of dancing, waving, partying revellers weaves its way noisily along the

city’s canals. The canal towpaths and bridges are also jam-packed with a no

less exuberant crowd who cheer and wave back as the boats sail by. In some

water to climb aboard the boats and join in the parade. Music blasts out across

the city and atmosphere is absolutely electric.

Don’t worry there is no entrance fee to

or stand to get the best view of the parade at least two hours in advance. The

bridges are the perfect location to get a bird’s eye view of the proceedings.

It’s also a great place for interacting with the happy revellers on the boats.

several hours to pass along the canal as there are just so many boats. Why not

dress up and join in the carnival spirit?

far to get home after partying all night! Take your pick from the glorious

Amstel at the edge of the Rembrandtplein, the delightful winding Zeedijk, close

to Central Station, the broad Reguliersdwarsstraat alongside the Flower Market

or the earlier mentioned Homomonument next to the Anne Frank House Museum.

Wherever you choose to visit in the city centre this weekend, you will find a

warm and welcoming no-attitude party atmosphere suitable for all the family.

find out the latest Amsterdam Gay Pride information at: