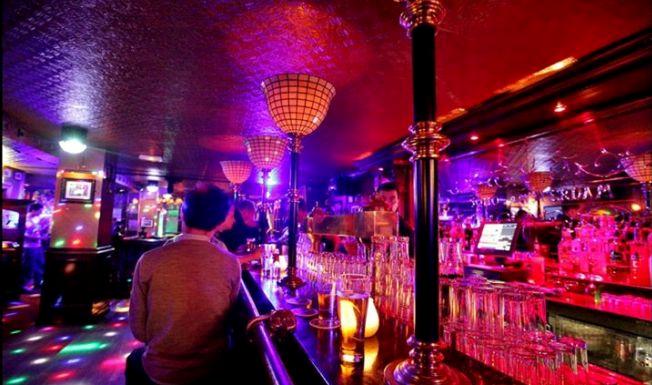 boat-trips and parks. It’s getting dark and it’s time for some drinks and 4/4

beats. Put on your heels and dive into Amsterdam’s fervent nightlife. The

Reguliersdwarsstraat is the heart of the Dutch GLBT community, with an enviable

history of its very own.

IT… If you were a club kid, a voguing

queen, a party animal and you are now over 40, you will probably feel a little

teardrop rolling down your cheek while reading the names of such infamous,

has been considered for many years the place to be, at least for once in your

lifetime, if you were gay and wanted to celebrate your pride candidly: no

social chains, no cultural divergences, no racial conflicts. All equal, all

different. It was all about music and being there.

have changed, a lot, I must say, and Amsterdam no longer boasts the glory it

used to back in those

days, but it is a fact that the Dutch capital will always remain the favorite

destination for many gay people around the globe. After all, the first bars

for men only were opened here in the 20’s

of the past century (one day I will write a few words about ‘t Mandje, a jewel

the famous fast-food chain, obviously!) saw the light in 1963.

a big thing compared to most of the other countries of good old Europe.

is left now of that past is probably hard to find in the hip bars, the

expensive restaurants and the fashionable clubs in town. In a time where every

single person is searching for those ephemeral moments of fame and glory, the

street among all has always been

gay street of Amsterdam: the almost impossible to pronounce

street that lies transverse to the Regulier”, the latter an old, long avenue of

street hit the fame of gay area in the 80’s, the very first in Europe, hosting

an unbelievable number of discos, many of them owned by tycoon Sjoerd Kooistra,

who committed suicide in 2010 after a conflict with Heineken brewery, a gloomy

occurrence that put Amsterdam’s craziest nightlife to a long, uncertain

deadlock. The Exit disco, the art-deco Café April, the ARC and the amazing Pub

Soho had to close for undetermined time.

business men reopened some of the venues keeping their old illustrious names,

such as the Soho or the Havana, and other went completely renovated and named

differently: the Café April became Ludwig II and the ARC was baptized anew as

is the year of the new bars, open to gay and straight people sharing their

passion for music, drinks and fashion. The

is a cheerful little restaurant where contemporary Dutch artists can display

their works. Food and art is a great combination, no doubt about it, and in the

summer the restaurant boasts an amazing terrace. A similar concept applies for

over two floors, the

is also a crazy, constantly busy, little venue. And if you like 80’s and

electro music with a “

bit of an attitude”,

you will probably enjoy this coffee-shop a lot.

is for the cocktails enthusiasts and is the only bar open until late at night. No

seatings and good house music, but expect to find a pretty hectic crowd of

youngsters. The bar is now part of the

Nyx (http://clubnyx.nl), one of the coolest discos in the street, which

No longer what it used to be in the past, the Soho remains, anyhow, one of the

biggest gay bars of the capital, according to www.reguliers.net

drink a good beer here. It is totally worth a visit, at least for the fame it’s

been oozing, not without ups and downs, since 1999. Surely the staff is kind

and professional. And good-looking is also an important requisite.

remember one of my first days in Amsterdam. My partner took me to see a Drag

Queen race on ice (!) held in the Reguliersdwarsstraat. The vibes were

incredible, amazing, I probably never felt so much joy and freedom.

During the show, a girl

offered me a beer and smiled, ironically: “welcome to Holland!”