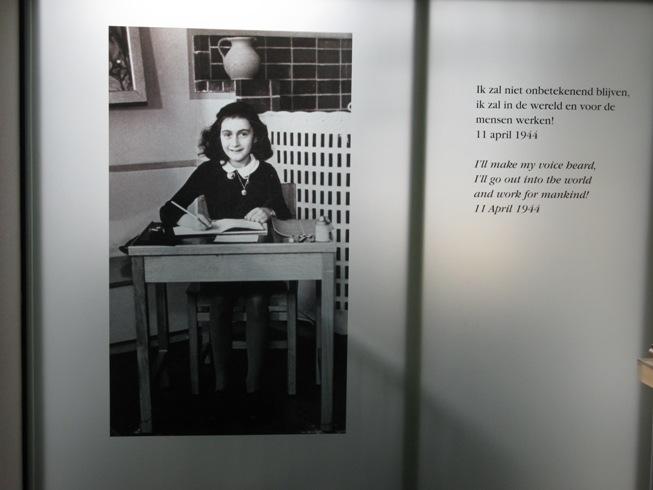 Located upon the banks of the majestic Prinsengracht Canal, within the stylish Jordaan district of Amsterdam, is the truly fascinating Anne Frank House Museum.  Regarded as one of the city’s top tourist attractions, welcoming around one million visitors each year, this inspirational museum is where you can explore the secret annex in which Anne Frank and her Jewish family concealed themselves from the Nazis during the Second World War.

cold, but sunny, winter’s afternoon when we visited the Anne Frank House,

diary which she wrote in this very house, whilst hiding from the Nazis during

World War II.  We had been told that this

was a very popular attraction and likely to attract large queues, luckily it

wasn’t too bad and we were inside after about ten minutes.

outside, overlooking the picturesque Prinsengracht Canal, the house resembles

an authentic Amsterdam abode, with large windows decorating the façade. The ground floor entrance, once the dispatch

entrance for Otto Frank’s spice company, is adorned with pictures of the Frank

family and is where the journey begins.

Short films depict the appalling conditions of the concentration camps

where Jewish families were sent, artefacts and personal belongings are also on

show to create a picture of what life was like during these times.

typical, steep staircase leads to the next floor which was previously the

offices of the business and where the helpers of the family worked.  The offices have been carefully restored to

how they would look during the 1940s, adding to the historic feel of the house.

secret annex, the main focal point of the museum and where Anne Frank, her

sister Margot, Mother Edith and Father Otto, together with the 3 members of the

van Pels family and Fritz Pfeffer hid away, is to the rear of the building and

accessible via a removable bookcase which masks its entrance.  Concealed by houses on each of its four

sides, which aided the hiding place, the secret annex is a small, cramped space

spent just over 2 years there, trying to avoid persecution from the Nazis.  It is here where Anne Frank wrote her iconic

diary, which she was given as a present for her thirteenth birthday.  Her diary is now famous all over the world

and has been translated into more than 60 different languages, selling over 30

exploring the house, we enjoyed an afternoon snack in the museum’s delightful

café where we reflected upon the educational, and at times very moving, journey

we had just undertaken.  Before exiting

the museum, we made time to visit the bookshop and also marvel at the Academy

Anne Frank) which proudly sits in a display cabinet for everyone to see.

and has created a lasting impression upon us.

value for money.  We would advise

visitors to book online to avoid the queues – more information can be found at www.annefrank.org/en/.