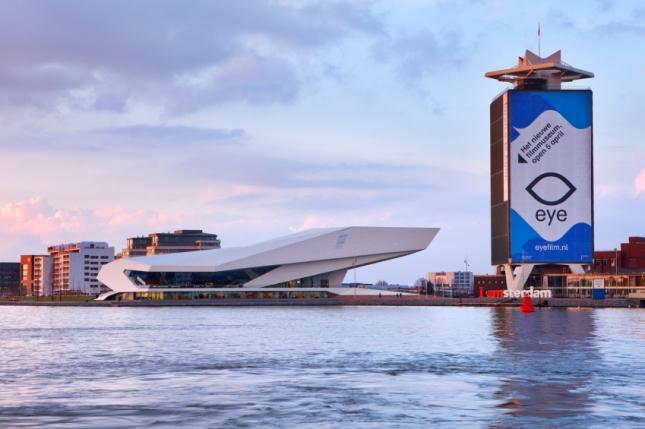 If you’re looking for

attractions you can find in the heart of the city, then a short ferry trip

criteria. And this comes even easier if you choose to stay with us in one of

Institute Netherlands is the Dutch centre form film culture and heritage, but

its operations have been appreciated on a global scale. With lots of activities

focusing on preservation, promotion and general support of cinematography

housed under its roof, the place is not only a pioneer in the field, but also a

treasury of many intriguing achievements in the area of motion pictures,

available to be explored in the most amazing museum (formerly known as, simply,

Filmmuseum) dedicated to the topic.

The Place – the location and the look

arrival to Amsterdam Centraal. The thing is, people usually get stunned by the

charming surroundings of Damrak, Oude Kerk and other ‘central’ attractions

reached by a short walk to the south, but it is only enough to look to the

of the modern-day architecture. The gleaming-white sharp-edged state-of-the-art

building, apparently floating above the water, is where the EYE is located. Erected

in the contemporary urban development of Overhoeks district, directly at IJ

Promenade, the new facility of the Institute – designed by Delugan Meissl

Associated Architects from Austria (responsible also for Porsche Museum in

Stuttgart, among others) – overlooks the city, forming an inspiring element of

the local landscape, pushing the limits of conceptual art and creating a

memorable interplay between light, space and movement. This exceptional design

of permanent change, elaborated upon inside the interiors of the place.

EYE – There’s more to it than meets the eye…

Beatrix officially opened the Institute on April 4, 2012, some expressed their

then) from the historic area of the Vondelpark to the new location, but it soon

became obvious that the newly-adapted 1,200 square meters of available surface

are much more convenient for a place like this. Plus, it’s closer to Schiphol

than the Vondelpark is. Furthermore, the seemingly ‘stern’ architecture of the

new EYE edifice reflects the concept of progress and evolution, which is

inherent to the film industry, and makes the most of the rich collection of

exciting exhibits on display to the visitors.

an understatement to say that the EYE is a museum or a cinematheque; a more

correct way to describe it in short would be a ‘temple of cinema’. Indeed, the

your reach make you feel an integral part of the whole cinematography business,

film equipment and many personal archives, with the oldest materials dating as

far back as 1895! This extensive collection is a great addition to the already

to the current EYE complex and starting with the fundamentals, the basement

is – as the name suggests – a room walled with

where you can change the images grouped into different categories: Discovery of

the World, Battle, Film Stars, Slapstick, Color and, of course, the Netherlands.

are small (but really comfortable) car-like

booths where visitors can take part in further interactive exhibitions by

watching both short fragments, as well as full films, additionally guided in

their cinematographic journey by some well-known Dutch figures like Jeroen

Krabbe or Georgina Verbaan. Moreover, these pods offer also an opportunity to

take a film quiz to check your knowledge of the business. Are you up for the

is where you’ll come across a selection of

many interactive installations allowing you to discover the ‘secrets’ of film

in an exciting, playful way. Some of the installations featured so far include,

for instance, a project by the name of Flipbook Machine, where participants

frames to finally print it onto a flipbook (think old Disney cartoons)!

the permanent exhibitions, the EYE features as many as four cinemas viewing

many fine classics on a daily basis. You can choose between a 67-seat small

Parisian-styled viewing room, two 13-seat ones and one with 315 seats; the

the most seminal works by Scorsese. There’s always something for everyone, no

matter when you go there.

interesting feature is the section dedicated to temporary exhibitions. Channeled

cinematography, the EYE delivers a sound portion of knowledge and a deeper

figures in the industry. If you come to Amsterdam before 9 June 2013, you’ll be

modern-day movie is complete without extras. The same rule seems to apply in

the EYE, for it offers a range of additional facilities in the form of a lavishly

supplied film shop where you can purchase many local souvenirs, DVDs and

postcards. Apart from that, there’s also an indoor restaurant with great views

on the outside and a tasty menu, so the EYE becomes the perfect place for a

Institute is located on IJpromenade 1. The best way to get there is to take a

free ferry (line 56, direction – Buiksloterweg) from the quay behind Amsterdam

Centraal; it leaves every 12 minutes and the trip over the IJ lake takes about

admission fees and opening hours are as follows:

before, the permanent exhibition in the basement is open free of charge and can

exhibitions section opens daily from 11:00 to 18:00 and the tickets cost as

€ 14; it’s worth remembering that tickets purchased on-line are as always €

that the EYE is closed completely on 30 April.