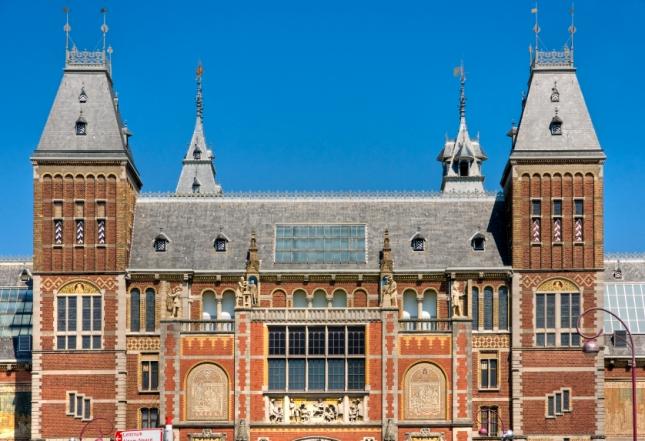 Ideally located upon Amsterdam’s famous Museumplein, referred to as a paradise for art lovers, the magnificent Rijksmuseum is an attraction definitely worthy of a visit. Boasting a huge collection of impressive exhibitions, the Dutch National Museum is dedicated to arts, crafts and history and includes renowned masterpieces such as Rembrandt’s ‘The Night Watch’ and Vermeer’s ‘The Milkmaid’.

With a rich history dating back to 1800, the Rijksmuseum is one of Amsterdam’s top attractions and is perfectly positioned within the artistic and culturally educational Museumplein just a short walk from the city centre. The stunning Rijksmuseum, which literally translates to State Museum, is regarded as one of the most breath-taking museums in the world and is the home of an expansive collection of paintings, sculptures and artefacts.

Originally located in The Hague, the Rijksmuseum was moved to Amsterdam in 1808 by order of King Louis Bonaparte. In 1885 the museum relocated once again to its current residence, which was designed by the Dutch architect Pierre Cuypers. Here, within the impressive building which was built in a Dutch neo-Renaissance style, visitors are given the opportunity to marvel at the museum’s incredible exhibitions, dedicated to arts, crafts and history.

Once inside the museum, visitors can expect to find a huge variety of historical Dutch artwork, much of which was produced during the Dutch Golden Age, as well as a superb collection of Asian art. The work of famous artists such as Rembrandt, Johannes Vermeer and Jan Steen are proudly presented for all to see. Rembrandt’s renowned painting ‘Night Watch’ is displayed within its very own hall, whilst Vermeer’s ‘The Milkmaid’ also takes centre stage.

Alongside the truly amazing paintings is a vast array of many other interesting items which each occupy their own area. Around 1000 sculptures, created with everything from wood to marble, can be found within the museum together with beautiful furnishings which include three remarkable doll’s houses dating back to the 17th century. The costumes collection boasts around 4000 items of clothing which date from the 1700s up to the middle of the 20th century, whilst the magnificent jewels exhibition comprises of 1000 iconic pieces. Another inspiring collection hosted by the Rijksmuseum is the weapons and ship models, featuring around 200 cannons, suits of armour and striking replicas of tremendous ships. The stern of the English flagship, the Royal Charles, is also housed here following its well-known capture in the 1600s.

Also within the museum, the largest public art research library in the Netherlands can be found, allowing visitors the chance to peruse a large collection of reference books and catalogues. A reading room is also available with a number of computers with internet access, enabling more research to be done.

Over the past 10 years the Rijksmuseum has been undergoing a complete renovation, which commenced in 2003 and has restored and improved the entire museum. In April 2013 the museum held a grand re-opening with former Queen Beatrix (recently replaced by King Willem Alexander) of the Netherlands making a special appearance. It is a definite must-see during your stay in Amsterdam. Further information, including bookings, can be found at www.rijksmuseum.nl/en.

Find information on all museums in Amsterdam