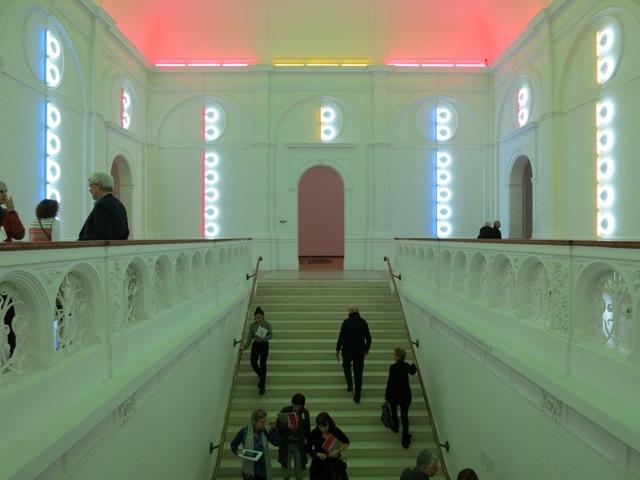 of random associations? Not really, for actually all of the abovementioned

contemporary art and design as the main theme.

around the picturesque district of the Oud-Zuid, passing by the beautiful

the Museumplein, you are bound to notice a very unusual structure ‘hovering’

over the neighborhood. To make things clear, we’re talking about a giant

Amsterdam (dubbed simply as ‘Stedelijk’) and apart from all the controversy

surrounding its design (by Benthem Crouwel Architects), one thing is for sure –

it cannot be missed. Given that, it seems that such exteriors make up for a

modern arrangements and the ‘content’ of the museum, i.e. the rich collection

Gilbert & George, just to name a few; with the new building opened to the

(rapidly growing) number be a recommendation on its own.

museum itself, the name ‘Stedelijk’ can be translated into ‘city-like’ and with

its distinguished architectonic features, as well as with the fine examples of

art to be found inside, it offers a fantastic opportunity to experience the old

and the new in one place. It was originally founded in 1874 and opened its

Willem Weissman, the city architect of the time; this is the red-bricked

building right next to the ‘bathtub’, finished initially with a neo-renaissance

façade decorated with several sculptures and modernized, enlarged and

simplified over the years. Still, it bears some visible trademark traits

reminding of the influential Dutch cultural heritage and providing a nice

contrast to both the new state-of-the-art wing, as well as to all the

exhibitions to be discovered inside.

times and the featured exhibitions change periodically, providing the visitors

with opportunities to experience many different forms of art, combining the

auditory and the visual to create something truly notable.

talking about the exhibitions, the ones that are currently on display include

2013). The former is organized by Ann Goldstein (Stedelijk’s director) in

music or photography; it features a broad scope of his works, including a mix

of politically and philosophically involved installations (

involving use of contemporary media (the

Reclamation Project), as well as many other innovative works of art. The

Werve, an enterprise encompassing multiple perspectives, including the artist’s

childhood memories, tales of his inspiration figure – Alexander the Great and a

record of participation in a grueling triathlon of 1,500 kilometers. Heavily

inspired by Chopin, van der Werve – also a pianist – pays a tribute to the

crucial to Chopin’s life in the movie. Yet another piece of work exploring the

themes of alienation and melancholy, so often featured in other works by van

offers a rich variety of programs. One of them is called ‘Forum’, involving

their latest findings and publications; it is a great opportunity to

participate in animated discussions during key-note lectures, in a company of a

highly-regarded academic environment. Another program operates under the name

of ‘DO IT!’ and features the most cutting-edge art and design forms, including

and modern visualizations. Another type of programs goes by the name of

‘Performance’ and offers an exceptional occasion to see international artists

truly noteworthy. Apart from that, you might also witness many

depending on the day, month and special features organized by the museum staff.

the Stedelijk collection is concerned, there is plenty to choose from,

actually, ranging from the classics by Van Gogh or Cézanne (

Freeing the Voice video, vivid and

well as many other photographs, paintings, installations, items and other sorts

the above, you might expect the museum to hold talks and lectures (

the issue of scandal in art and life, on 18 January or

The Rationale of the Collection by Boris Groys, on the matter of

presentations or music events, each of them featuring fine guest appearances

and an active group of participants. Become a part of the cultural movement,

choose the topic of your interest and join in!

exhibition agenda change on an ongoing basis, make sure to visit www.stedelijk.nl/en