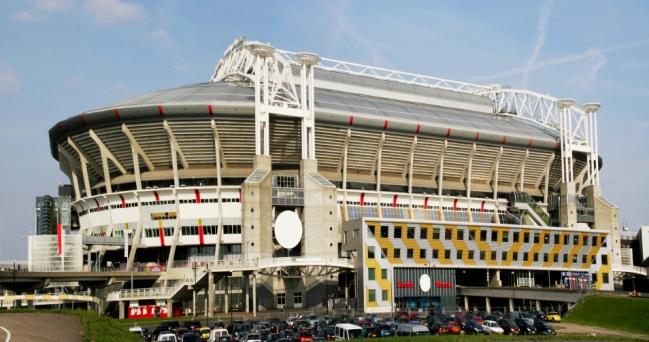 If you fancy a taste of the real new modern

Amsterdam displaying a beautiful new style of architecture combined with the

sensation of being in a futuristic micro-city within an old city, then you

should certainly visit the Amsterdam Arena. Here you will have the chance to do

a whole range of fun activities, from watching the Dutch national team or Ajax

Amsterdam play football in a stunning stadium, to listen to some great live

If you thought the world famous Amsterdam

Arena is strictly confined to football fans, cheering crowds, and games, then

you need to guess again. When entering its neighbourhood for the first time, I

was assured that I will witness a simple green field, some football seats, and

the typical venue for watching a nice game as in any other cities in Europe. In

fact, what else could it have I thought since my only visual connection to the

to Amsterdam Central Station. I mean, it surely caught my eye during those

train rides as a beautiful colossal modern arena, and being a football fan

myself, I have seen it on TV during the Euro 2000 games hosted by Holland.

However, when I stepped in the district for the first time, I realised that it

transcended by far my limited a priori assumptions.

Indeed, the Amsterdam Arena is much more

than a football sports ground. As soon as I entered the area, I witnessed a complex

modern experience in a recently built neighbourhood centred around a breath

cinema, large shopping malls, a park and a ride facility. Easily connected to

the centre of Amsterdam via both a train and a metro, it is a must see trip for

anyone interested in modern architecture, and in a general exciting afternoon

The grandiose building project was thought

hosted in Amsterdam. With the hope of bringing in the charming Dutch city the

the authorities have presented a breakthrough plan for constructing an Olympic

village in a deserted area, only 8 kilometres from the centres of Amsterdam.

Despite losing the bid to Barcelona, the $140 million plan was continued

usually played became too small for the ever increasing fans. The whole building

project was finalised in 1996 when the Amsterdam Arena, as well as its comprehensive

facilities flanking the stadium have been officially inaugurated.

Instead of becoming Holland’s Olympic headquarters,

the Amsterdam Arena became a symbol of the Ajax football team, a squad with

trophy acquired only a couple of years before the grounds’ official opening. In

fact, the first match that was played there featured Ajax, and AC Milan, a team

they have beaten in 1994 in order to conquer Europe’s major trophy. Nowadays,

both Ajax, and the Dutch national team enjoy a large home support for the games

they play at the stadium. The ground has staged the final of the UEFA Champions

League final in 1998, and will soon be organizing the Europa League Final in

May 2013. If you ever participate in a football match at the arena, one word of

sea of Oranje shirts bouncing up and down, and singing throughout the match.

The official opening of the stadium was

indeed spectacular, the Queen of Holland herself making a large curtain fail

and discovering the world’s largest painting De Zee (in English: The Sea)

concerts which gathered a total audience of more than 160,000 people in the

arena and its surroundings. In addition, a large torch relay was organised in

Cruyff and Frank Rijkaard running with the flame.

events, and it is the first stadium in the world that has an underground

passageway, while being the first in Europe with a sliding roof, so needed due

to the sketchy rainy Dutch weather. When I first stepped inside, I was

facilities existent inside the arena. The place is a virtual micro-climate of

gym, an ultra VIP players’ lounge, and a lot more. The car drivers can be

stadium, and 500 cars in the inside parking area.

such as Madonna, Celine Dion, Michael Jackson, the Rolling Stones having

displayed within the stadium. In addition, some of the world’s biggest party

history of one of Holland’s most traditional and successful clubs, then you can

surely enjoy the Ajax museum inside featuring various trophy, videos, and a

highly interactive presentation offered by the fun and friendly guides.

In addition, you can also endeavour in the

players give interviews before matches, you can check out the control room of

the stadium, as well as have a great view of the Ajax team training on the nearby

field. The tours cost only €12, and occur 5 times daily while lasting for about

of football within the beautiful arena.

Other Attractions in the Neighbourhood

If the Amsterdam arena experience was not

enough for you, then you can go ahead, and explore the neighbourhood for a

large array of other fun activities. Alongside the arena, a whole new small

town centre (the Amsterdam Zuidoost Centre) has been created, and is all well

skyline around the stadium. Among the nearby attractions, the famous Heineken

5000 people that can join in for fun concerts and gigs. Next to it you can

To add the cherry on top, the very large nearby

prices, and purchase various presents and

souvenirs for your loved ones back home. The shopping mall is situated over

four floors and abounds of various types of shops including ceramic, art or

gadgets. If you are a fan of interior decorations, you can explore an unusual

yet charming display of colours and special furniture for your homes, at the

specialised shops found all around.

While visiting the Arenas, I could not help

under glass roofed void on the fourth floor of the vast shopping mall. There

are also various cafes, as well as child facilities if you come accompanied by

your little ones so, in other words, there is room for everyone in this Mecca

of shopping and modernity.

The Amsterdam Arena is located

approximately 8 kilometres south from the main train Central Station. However,

Amsterdam-Bijlmer-Arena. When you walk out the metro, make sure you take the

exit Arena Boulevard, and walk to the stadium via the impressive modern

commercial mall. You can also reach the Arena by bus via the lines 29, 158,

arrive by car from the ring by taking direction South Utrecht, and exit very

soon at the Transferium. There you can park your car, and walk to the arena straight

from there. You can find more information about how to get around in Amsterdam using the public transit system by watching the video below.

vicinity, they should be able to guide you easily to the stadium area. Remember,

most Dutch people speak very good English, and are generally very helpful so do

not hesitate to ask them any questions if you need so.